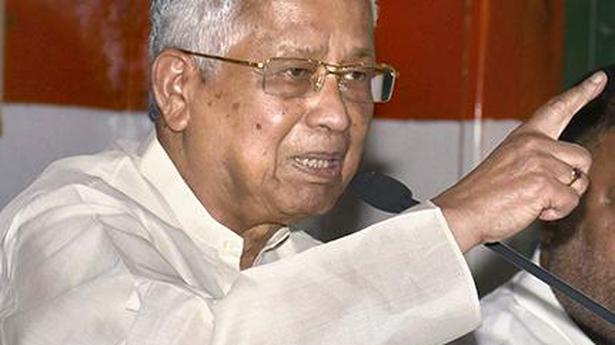 Former Assam Chief Minister Tarun Gogoi on Monday told the Bharatiya Janata Party that it should think twice before using its “Pakistan politics” to abuse the Congress which had bifurcated the neighbouring country in 1971.

Mr. Gogoi made these remarks in response to BJP general secretary Ram Madhav’s barb on Sunday that the Congress was pro-Pakistan and might win an election if they contested in the neighbouring country.

“The BJP should remember that the Congress cut up Pakistan into two almost five decades ago. The party uses Pakistan as a ploy to divert attention from real issues such as job and farm crisis and whip up communal tension,” Mr. Gogoi said.

He also alluded to Prime Minister Narendra Modi’s “biryani and birthday diplomacy” and “love letter” to his Pakistan counterpart Imran Khan to underline the BJP’s fondness of the neighbouring country.

Mr. Gogoi criticised Mr. Modi for discarding veterans such as former Deputy Prime Minister L.K. Advani and Arun Shourie. “Only the BJP can ignore leaders like Mr. Advani and replace him with (BJP president) Amit Shah for the Gandhinagar seat,” he said.

But, the former CM clarified, that the Congress fight was not against Mr. Modi but his divisive, dictatorial and anti-poor policies.

With extensive screening, lockdown, COVID-19 hotbed Karanja brings down the cases from 134 to one Source: thehindu.com Related

The Central Bureau of Investigation (CBI) has approached the office of Lok Sabha Speaker Om Birla for sanction to prosecute three Trinamool Congress MPs and one former parliamentarian in the Narada News sting operation case, said the agency on Thursday. A CBI official said the approval had been sought with respect to MPs Saugata Roy, […]

No new COVID-19 case in Tripura

No new case of COVID-19 infection has been detected in Tripura, health officials said on Wednesday. They said one positive case, a 45-year-old woman, was released last week and the second infected person, a 32-year-old trooper of the Tripura State Rifles (TSR), was undergoing treatment and stable. Samples of 3,081 people across the State were […]