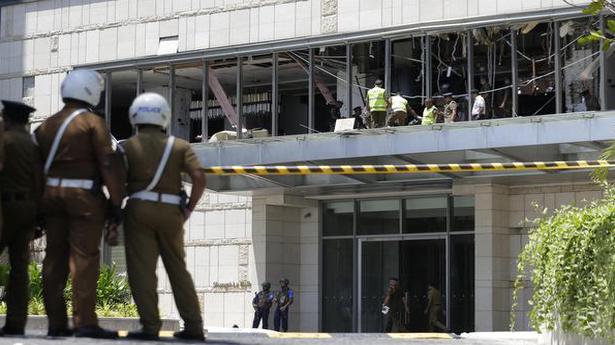 A prominent businessman S.R. Constructions Managing Director Alimineni Surendrababu and five of his friends, who had gone to Sri Lanka on a holiday trip, narrowly escaped from a blast in Shangri-La Hotel, in Colombo on Sunday.

While Mr. Surendrababu was injured in his nose, two of his friends too received minor injuries while they were having breakfast at the hotel. Mr. Surendrababu, a TDP leader, who had tried for a party ticket from Kalyandurg Assembly constituency in Anantapur district, ran out of the hotel from emergency exit and saved himself.

Superintendent of Police GVG Ashok Kumar said all six in the team were safe, but could not be contacted for further details.

Anantapur District Collector G. Veerapandian told The Hindu that as per information received from the manager of Mr. Surendrababu, he was fine with just an injury from a splinter on his nose, while rest of his team members went doing fine without any injury. Initially all six of them ran helter-skelter after the blast and it took quite some time for all of them to meet and know about their welfare.

Assam Congress, AIUDF in unholy alliance: Ram Madhav Bharatiya Janata Party general secretary Ram Madhav on Sunday said the Congress has forged an “unholy alliance” with perfume baron Badruddin Ajmal’s All India United Democratic Front (AIUDF) to stop the BJP in Assam. He also said that the BJP and its allies would win 20 of […]