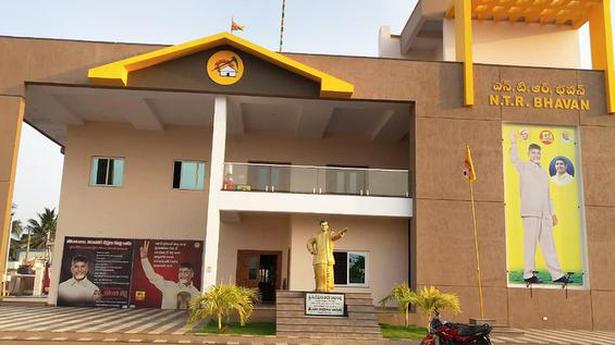 The Telugu Desam Party’s dream to have a beautiful and modern office in Srikakulam has become a reality after a wait of three decades. The new office with a corporate look catches the attention of everyone on 80-feet Road near the Collector’s office. The finishing touches are likely to be completed in a couple of weeks.

The office has a spacious conference hall, video conference hall, media room, separate chambers for TDP president and heads of frontal organisations, a library, pantry, guest houses and other facilities. The building has been constructed in 55 cents although it has two acres of land. Ample parking facility is being seen as major advantage.

“After studying the designs of NTR Trust Bhavan in Hyderabad and other offices located in various places, we constructed Srikakulam office with an estimated expenditure of ₹3.5 crore. Chief Minister N.Chandrababu Naidu’s public appreciation is a great reward for us,” said Yarlagadda Venkanna Chowdary, TDP Palasa in-charge and managing director of Sardar Projects Private Limited which constructed the building on no-profit-no-loss basis.

TDP district president Gowthu Sirisha said she was happy that the building had become a reality during her tenure as president. “Our aim is to make it a knowledge centre for young party activists. They will have to know the ideology of the party by attending training classes and other programmes,” she added.

According to her, former Union Minister K.Yerrannaidu, her father and Palasa MLA Gowthu Shyam Sundar Shivaji mooted the idea of constructing the building three decades ago. A piece of land was bought for this purpose in Balaga area. However, it did not materialise at that time due to various reasons. As part of allocating land for various parties, the government allocated 2 acres on 80-feet Road. After this, the party sold the old piece of land in Balaga and utilised the funds for its construction.

Srikakulam MP Kinjarapu Rammohan Naidu and Srikakulam MLA Gunda Lakshmi Devi said the new office would be a great gift for the next generation leaders. “Leaders and activists will spend more quality time when they have all facilities in the office. We will plan to establish offices in Assembly constituencies and mandal headquarters in future,” said Mr.Rammohan Naidu.

Execution of Nirbhaya convicts will not happen on Jan. 22 as mercy plea filed: Delhi govt to HC

The Delhi government on Wednesday told the High Court that execution of the death row convicts in the Nirbhaya gangrape and murder case will not take place on January 22 as a mercy plea has been filed by one of them. The four convicts — Vinay Sharma (26), Mukesh Kumar (32), Akshay Kumar Singh (31) […]

The West Bengal Urban Development Minister has received the required sanction from the Ministry of External Affairs (MEA) to attend the C40 Cities Climate Summit in Copenhagen, Denmark, even as Delhi Chief Minister Arvind Kejriwal was yet to receive clearance for the same, Delhi government sources claimed on Monday. According to sources, Mr. Kejriwal is […]

Contest between a veteran and a debutant in this BJP bastion

A young and controversial Bharatiya Janata Party (BJP) candidate and a Congress veteran will go head to head in Bengaluru South parliamentary constituency, which has been a BJP bastion for over 28 years. High drama ensued the candidate selection, with party workers and even the nominees themselves surprised by the choices. The Congress announced the […]