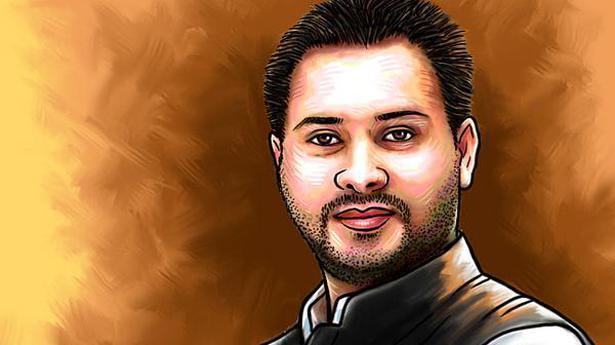 Born on November 9, 1989, four months before his father Lalu Prasad Yadav, at the age of 42, became the Chief Minister of Bihar for the first time, Mr. Tejashwi is now at the centre of the opposition campaign to unseat Nitish Kumar, who has been in power for 15 years.

He is the youngest of the nine children of Lalu Prasad Yadav.

Today’s media-savvy crowdpuller stands in stark contrast with the Tejashwi Yadav of May 2019, when the RJD suffered a big loss in the Lok Sabha elections.

It was the first election of the RJD without Mr. Lalu Yadav in charge. Mr. Tejashwi’s elder brother Tej Pratap Yadav had formed the Lalu-Rabri Morcha. The youngest of Mr. Lalu Prasad’s nine children, Mr. Tejashwi faced criticism for “not accommodating” allies, especially the Communist Party of India’s rising star Kanhaiya Kumar, due to “insecurity”. There were reports of him not being “respectful” towards the RJD’s senior leaders.

He did not cast his vote in the Lok Sabha polls, after suffering a ligament injury. For more than a month, he disappeared from the public eye, leaving it to others to explain the party’s humiliating defeat — the RJD drew a blank in the Lok Sabha election.

So what has changed in 18-months? “Nothing,” says his close aide Sanjay Yadav. The ‘Delhi media’ have discovered Mr. Tejashwi only now, says Mr. Yadav. “ False perception was created that he [Tejashwi] doesn’t have a connect with the party cadres or the voters. If that was the case, the party would have disintegrated after Nitish Kumar returned to the NDA in 2017.Did that happen?”

The transition from being Mr. Lalu Prasad’s son to coming on his own took a long time for Mr. Tejashwi. Politics was not his first choice of career. He started out as a cricketer after dropping out of class 10. He was studying at Delhi Public School, R K Puram, in Delhi.

A middle order batsman with good cover drive, he was in Delhi’s under-19 cricket team at the same time when Virat Kohli was playing. He also played a season for Jharkhand during a Ranji Trophy tournament. Later, he was picked for the Delhi Daredevils IPL team, where he had to stick it out on the reserve bench for four seasons from 2008. In 2012, he gave up on cricket and decided to focus full time on politics.

Mr. Lalu Prasad picked him over his elder brother, Tej Pratap Yadav, to be his political heir. Mr. Tejashwi’s first public address was in 2010 when he campaigned with his father for the Assembly election. The RJD then won only 22 seats in the 243-member Assembly.

When Mr. Lalu Prasad was arrested in September 2013, the party was not ready to anoint Mr. Tejashwi as the heir. Ram Kripal Yadav, a Lalu aide, told reporters then that the polls were being fought under guidance of the party patriarch. “Tejashwi is very much involved in the party affairs. But he will be made a leading face of the party only in the long term,” he had said. A year later, Mr. Ram Kripal switched over to the BJP after Mr. Lalu Prasad chose his daughter Misa Bharati for the Pataliputra seat over him.

In 2014, Mr. Tejashwi did not contest the Lok Sabha elections as he was not yet 25.The RJD won only four seats out of Bihar’s 40 seats, while his mother Rabri Devi lost from Saran and sister Misa Bharti from Patliputra.

At 26, Mr. Tejashwi contested his first election in 2015 from the Raghopur Assembly constituency and won as the RJD and Nitish Kumar’s Janata Dal-United (JD-U) were in an alliance. With 81 seats, 11 more than the JD (U)’s tally, it was a resounding victory for Mr. Lalu Prasad. Mr. Tejashwi was appointed Deputy Chief Minister under Nitish Kumar.

Months before the alliance fell, a CBI case was registered against Mr. Tejashwi on State government’s consent for a ‘land for hotel” scam. Mr. Tejashwi accused the BJP of playing vendetta politics. The Mahagatbandhan collapsed in July 2017 when Nitish Kumar returned to the NDA.

In 2018, Tejashwi got the vindication that he was waiting for. His party won the bypolls for Araria Parliamentary seat and Jehanabad assembly seat.

Now, when the elections are under way, Mr. Tejashwi is facing the biggest test of his career — unseat the NDA from power.

Senior RJD leader and Rajya Sabha MP Manoj K. Jha, who has been associated with Mr. Tejashwi since 2012, claims that, he is a keen learner. “He has the ability to listen to everyone from people of Bihar to experts who closely study the State and then make his mind independently,” Mr. Jha said.

Congress president Rahul Gandhi on Monday described the party’s proposed minimum income guarantee scheme as “diesel for the engine” of the Indian economy. Mr. Gandhi promised to give government jobs to 22 lakh youths in one year, make 10 lakh recruitment in panchayats and said no farmer will be jailed for not repaying loan, if […]

Malaria deaths in India declined from about 29,500 in 2000 to about 7,700 last year. India made impressive gains in the global fight against malaria, recording the largest reduction in cases in South-East Asia from 20 million in 2000 to about 5.6 million last year, according to the World Health Organisation. The World Malaria Report […]

The major highlight of the four-day exercise is participation of Indian Navy’s Vikramaditya carrier battle group and the Nimitz strike group of the US Navy The navies of India, the US, Australia and Japan on Tuesday began the second phase of the Malabar naval exercise in the northern Arabian Sea involving two aircraft carriers and […]