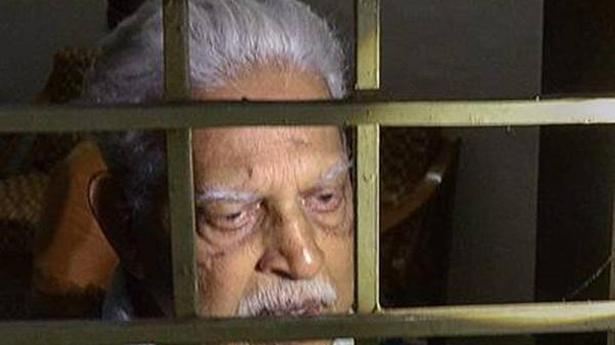 Telugu poet and activist Varavara Rao was produced in the court of the Additional Civil Judge and Judicial Magistrate of First Class, Pavagada, Tumakuru district, on Thursday.

He is Accused No. 12 in the naxal attack case in which seven people, including six Karnataka Special Reserve Police (KSRP) personnel, were killed in Venkatammanahalli, Pavagada taluk. The KSRP battalion was camping in the area when naxals attacked on February 10, 2005.

As the appeal by the Karnataka police had been admitted in the High Court, Mr. Rao was produced in the court.

Hundreds of police personnel were deployed on the court premises. Mr. Rao was brought in a police van amid tight security to the court hall.

In a bid to implement ‘One Nation, One Ration Card’ across the country by June 1, 2020, the Centre on Friday kick-started inter-state portability of ration cards between Telangana-Andhra Pradesh as well as Maharashtra-Gujarat. This means beneficiaries living in Telangana and Andhra Pradesh can buy their quota of ration from the Public Distribution System (PDS), […]

Five policemen were suspended after they were found chatting on WhatsApp while on duty in sensitive areas of Madhya Pradesh’s Jabalpur city on the day of the Supreme Court’s verdict in Ayodhya case, an official said on Sunday. The five personnel, all sepoys, were deployed in some sensitive city areas on Saturday in view of […]