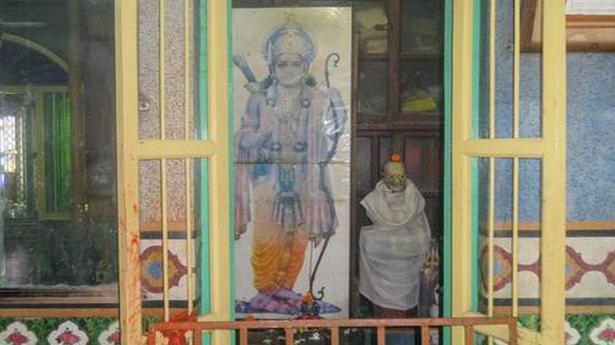 An idol of Mahatma Gandhi is being worshipped within the complex of a Jagannath temple in Odisha’s Berhampur for the past six decades.

The worship of the Father of the Nation continues in this temple since its establishment at Gosaninuagaon in Berhampur in 1960. Like other deities, Bapu also has a separate small temple for him. It is called Bhagavat Gadi (pedestal of Bhagavat purana). In it the Mahatma’s idol is worshipped along with the Odia Bhagavat, written by poet-saint Jagannath Das, and pictures of Lord Rama and Shiva.

Like all Hindu deities, the idol of Gandhiji is worshipped every day as per traditional rituals. Prasad is offered to this idol at noon and evening. Round the clock kirtan continues in front of this small temple. According to Panchanan Choudhury, the managing trustee, while the Jagannath temple complex was being built, senior citizens of Gosaninuagaon had decided to worship Gandhiji’s idol in it. At that time the Mahatma was adored as a divine being who had ushered in the new age of independence and social changes.

During the freedom movement, Bhagavat gadi or Bhagavat tungi in Odisha villages used to be major congregation points in the evening, where people came to listen to reading of the Odia Bhagavat. Leaders of freedom struggle motivated commoners at these congregations. In rural areas of Odisha, Mahatma Gandhi was sometimes believed to be incarnation of Lord Krishna. So, it had been decided to worship his idol along with the Bhagavat. Odia Bhagavat is still read here every evening.

For most visitors to this Jagannath temple complex, this unique worship of the father of the nation draws attention. “By witnessing it, we realise the kind of devotion and respect our forefathers had for the Mahatma and his deeds, which we seem to have forgotten” said Satyanarayan Dash, a resident of Berhampur.

On the eve of protests planned by various organisations against the Citizenship (Amendment) Act on December 19, Section 144 of the Cr. PC has been imposed across Karnataka and Uttar Pradesh. The Congress, Nationalist Congress Party and various other parties have formed a front and are organising a protest in Mumbai on Thursday against the […]

The Payyannur police on Friday arrested three persons for allegedly cheating a youth after promising him job at the Kannur airport. Sub Inspector Sreejith Koderi said all the three accused — C. Priyadarshan, 29, Anoop Kumar, 33, and V.V Chandran, 55, of Trikaripur in Kasaragod — were arrested based on a complaint filed by 26-year-old […]

Eighty-six new COVID-19 cases were reported in Odisha on Friday, taking the total to 1,189. Eighty of these were migrant workers who recently returned Source: thehindu.com Related