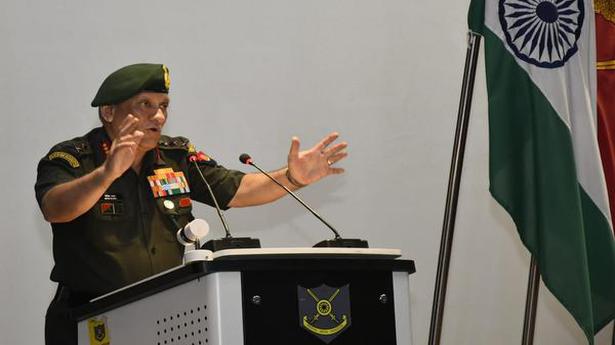 The terrorist camp at Balakot across the border in Pakistan that was destroyed by Indian armed forces through a surgical strike earlier this year has been “reactivated” very recently, Chief of Army Staff, General Bipin Rawat said in Chennai on Monday. Though at least 500 persons were waiting to infiltrate into India, adequate measures have been taken to curb it, he said.

Interacting with reporters at the Officers Training Academy (OTA), he said though the terror camp at Balakot was destroyed by the Indian armed forces, it had been reactivated. “And now they have got their people back.”

Gen. Rawat was in Chennai to inaugurate the Young Leaders Training Wing at the OTA.

On whether a repeat of India’s response to Balakot could be expected, Gen. Rawat said: “Why must we expect a repeat of a similar thing? Earlier we did something, then we did Balakot, why not keep the other side guessing as to what we will do? Why tell them what we are going to do. Why not keep them guessing? Why say repeat? Why not something beyond that?”

Since the snowfall came down and ice melted, the shift had taken place in the northern part of Jammu and Kashmir towards Gurez and those areas were getting activated, he said and added that as temperature kept falling and snow came in, they started coming in to areas that had less snowfall. “As of now, we have taken adequate measures, we have pushed in more troops, we have increased deployment along the LoC to ensure that infiltration is curbed to the maximum extent,” he said.

Asked about the situation in Kashmir, he said terrorists were trying to creating a facade as if there was clampdown in the Valley but normal activities were on. He also said the restrictions would be eased up gradually.

The shutters of shops in Jammu and Kashmir were down but they were operating from the rear, he said and added terrorists were threatening the shopkeepers because they wanted to show everybody outside that there was a clampdown.

Asked about radical Islam terrorism, Gen. Rawat said: “I feel the interpretation of Islam by some elements, who possibly want to create disruption, is what is fed to a large number of people… I think it is important that we have preachers, who convey the correct meaning of Islam.”

On India and China relations, he said both the countries have worked out a good mechanism through which any escalation of tension was defused. “Whenever we feel that there is any scope of escalation of tension, it is defused through the meetings that we have between the border personnel,” he said.

On incidents along the border with China, he said: “These are transgressions that happen because of differing perceptions of the Line of Actual Control.. I don’t think this would be allowed to accelerate.”

Trump to visit India ‘at some point’

U.S. President Donald Trump said he would visit India at some point. “He [Mr Modi ] wants me to go there. I will be going, at some point, to India,” Mr. Trump said. In response to a question on a potential trade deal with India, Mr. Trump said India and the U.S. were “dealing with” […]

The Pension Mohalla Police have registered a complaint against a constable for assaulting a person during the lockdown here on March 27. Video clips of the police constable hitting Shabbir Ahmed, an autorickshaw driver, had gone viral on social media and attracted severe criticism. Wife files complaint The police registered an FIR on Monday, based […]