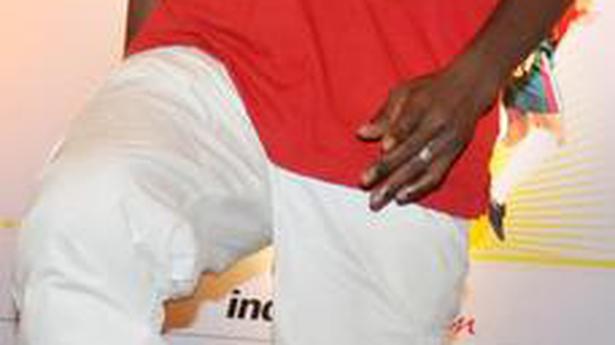 The thick grey streaks on his faux hawk hairstyle and a slight paunch are tell-tale signs of ageing. But for Inivalappil Mani Vijayan, Kerala’s most celebrated footballer, who turned 50 on Thursday, age is just a number.

And for him there is no life away from the beautiful game as he continues to defy the age showing dazzling skills and athleticism on the field, whether coming on as substitute for Kerala Police or playing in the veterans league. A recent video that went viral on social media saw him outplaying players half his age in the Champions League 2019 organised by Qatar Indian Football Association. It was a throwback to the days when I.M. Vijayan conjured up moments of magic scoring goals from improbable angles and situations.

His lanky frame and uncoordinated body moments were deceptive. So was his quick change of pace which foxed his markers and enabled him to give killer passes to his teammates. He was the finest exponent of the free-kick and the overhead kick during his playing days. The scorer of country’s fastest international goal, Vijayan’s life is a metaphor for Indian football.

As a child born into a poor Dalit family, Vijayan sold soda in the Thrissur municipal stadium to make both ends meet and to watch football matches for free. Not a very bright student, Vijayan found solace in football. It was a pleasant diversion for him from the tough life. As he grew up, Vijayan became a star in the sevens football circle, earning ₹40 to ₹50 rupees per match. His precocious talent soon became the talk of the town and words reached E.M. Sreedharan, the Kerala Police coach. Sreedharan wanted to have him in the Kerala Police team and he approached DGP M.K. Joseph. Vijayan was only 17 years old and ineligible to take part in the trials, but the DGP got special permission from then Chief Minister K. Karunakaran and the rest, as they say, is history.

Nicknamed the Black Buck for his exploits on Kolkata Maidan, Vijayan found fame playing for Kolkata clubs. He is a winner of the coveted Arjuna Award and captained India before he retired on a high after the Afro-Asian Games in 2003. After retirement, Vijayan dabbled in films making his debut in national award winning film Santham directed by Jayaraj. He also tried his hands in coaching though with little success. Vijayan, a circle inspector with the Kerala Police now, continues to inspire generations of footballers.

Collector orders setting up of safety committees in all schools

Kannur District Collector T.V. Subhash has ordered the setting up of safety and health monitoring committees in schools and asked officials to conduct emergency inspections to ensure the safety of students. For this purpose, monitoring committees will be formed in all schools in the district, including anganwadis, involving the police, doctors, overseers in local bodies, […]

‘Stay away from CAA protests on campus’

Amid protests by students against the Citizenship (Amendment) Act in several universities nationwide, Banaras Hindu University on Tuesday advised its students not to participate in any such activities on the campus. The warning came after opposing groups of students held marches over the CAA. While various non-ABVP student groups, under the banner of the Joint […]