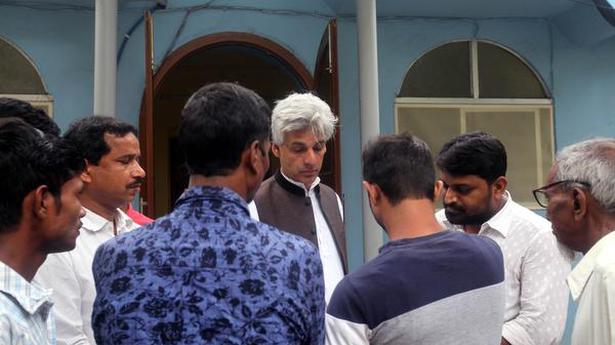 It was early in the morning and Isha Khan Chowdhury had sleep in his eyes. In the long corridor adjacent to his bedroom, the Toronto-bred Choudhury family scion sat down as his supporters assembled in the courtyard. Mr. Chowdhury, a Congress nominee, is one of the three candidates of a family contesting from the Malda North seat.

Beside him is his father, Abu Hasem Khan Chowdhury, also a candidate.

Nearby, too, is his first cousin Mausam Benazir Noor, an MP.

While both Mr. Abu Hasem and Mr. Isha are contesting on Congress ticket from Malda South and Malda North constituencies, respectively, Ms. Noor has just left the Congress to represent the Trinamool in the Malda North seat.

They are all connected to the Chowdhury family patriarch, the legendary eight-time Congress MP from Malda, the late Abu Barkat Ataur Ghani Khan Choudhury, who was also a Minister in the Cabinets of both Indira Gandhi and Rajiv Gandhi. Ghani Khan is a legend of sorts in Malda and thus, every election reverberates around his legacy, even a decade after his death.

“This time, for the first time in decades, I wonder if Kotowali [where the Chowdhurys reside] will be able to send any member to Parliament,” said a journalist from Malda. He has his reasons.

In the Malda North Lok Sabha seat, the Muslim vote in four of the seven Assembly constituencies may get divided between brother Mr. Isha (Congress) and sister Ms. Noor (Trinamool), benefiting the Khagen Murmu of the BJP.

In the remaining three Assembly constituencies, which are tribal pockets, Mr. Murmu, a tribal candidate, may have an advantage.

“Mr. Murmu left the CPI(M) a few days ago, damaging his credibility. In the Muslim areas, the Trinamool lost its credibility as it did not let anyone vote in the panchayat poll, and the BJP does not have any vote in any case. Both the tribal people and the Muslims, therefore, would vote for Congress,” Mr. Khan said.

In Malda South, however, Mr. Abu Hasem has a clear advantage as the CPI(M) has not put up a candidate and many Left supporters confided that they would vote for Mr. Choudhury. But there is more than meets the eye in Malda.

“Every State has a ‘black hole’ where the crime rate is very high,” said the officer-in-charge of the South Malda Police Station, on condition of anonymity.

The officer gave a list of crimes to establish why Malda, bound on all sides by north Bengal’s districts, two States (Jharkhand and Bihar), and an international border, is Bengal’s “black hole”.

Malda, he said, has emerged as a “business hub” for guns and bombs, fake currency trading, and illegal poppy seed cultivation.

But the Trinamool’s district president and candidate from Malda South, Moazzem Hossain, a doctor, said that outside support is more of fantasy than a feasible option during the election. The Trinamool would beat its rivals in “a fair game”, said Mr. Hossain, a doctor, known for his clean image in the murky politics of Malda.

“In Malda North, Ms. Noor has her support base of being an MP for 10 years. In addition, she is contesting on Trinamool ticket, which is growing fast in Malda,” said Mr. Hossain.

Regarding his chance of winning in Malda South, Mr. Hossain says the, “Ghani Khan magic has receded.”

“Abu Hasem [Ghani Khan’s brother] is respected but cut off from people. The seat has 67% Muslim vote,” he said.

Despite such a strong defense by Mr. Hossain, the BJP is an emerging force in Malda, a Muslim majority district. Even after acute violence, a year ago, the BJP bagged six of the 38 seats in the Malda Zela Parishad, the highest level in the three-tier Bengal Panchayat, which is not a mean feat.

“We also got 20% votes in a Congress-dominated district,” said Khagen Murmu, the BJP candidate.

A lifelong Communist and the CPI(M)’s tribal face in central Bengal, Mr. Murmu fought on a CPI(M) ticket in 2014. He met this correspondent at his residence, with a Maulana from his constituency present. “Do not put my name,” the Maulana said, insisting that the Muslim vote will go to the BJP and to Mr. Murmu.

“He [Mr Murmu] was with the CPI(M) and has secular credentials, while the BJP is on the rise in Malda,” the Maulana argued. Mr. Murmu endorsed the view.

“Pakistan, Balakot, terrorism — are not issues here. More importantly, 56 Islamic countries have said that Narendra Modi is the ideal Prime Minister,” said Mr. Murmu, connecting the comment with his constituency’s profile. The issue, according to him, in the Muslim majority district, is, “Development, which Mamata Banerjee failed to deliver,” Mr. Murmu said.

“Now, the BJP has replaced the CPI-M [earlier in the second position] in the Muslim majority areas because we focus on development for all — ‘Sabka Sath, Sabka Vikas’,” said the former Communist leader, before rushing out with the Maulana. They had to attend a Ramnavami celebration meeting, a local coordinator said.

BSP chief Mayawati on Sunday accused Prime Minister Narendra Modi of trying to create differences between her party and the SP as he feared the BJP was lagging in the first four phases of polling in Uttar Pradesh. Ms. Mayawati said the Modi government had made every attempt to try and “break and hurt” the […]

Most of them were found in Ujjain, say officials Source: thehindu.com Related

Day temperatures are likely to be above the normal by two to three degrees Celsius in Thiruvanathapuram, Alappuzha, Kottayam, Thrissur, Kozhikode and Kannur on Monday and Tuesday, the India Meteorological Department (IMD) has warned. On Sunday, the maximum temperature was higher than the normal by 3.4 degrees C in Kozhikode, 2.9 degrees in Alappuzha, 2.6 […]