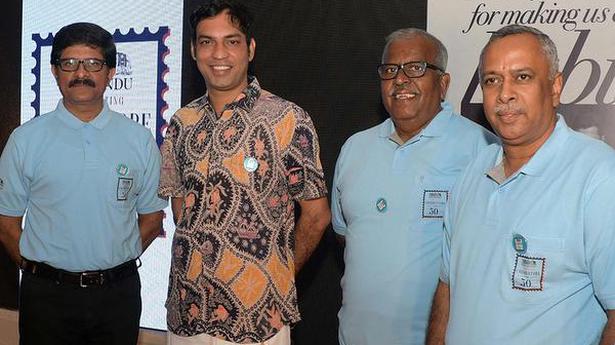 Creating a greater tomorrow for children will be the “single biggest role” for The Hindu, L.V. Navaneeth, Chief Executive Officer, THG (The Hindu Group) Publishing Private Limited, said in Coimbatore on Sunday.

Addressing employees of The Hindu from the western region and their family members at a function organised to celebrate the golden jubilee of the newspaper’s Coimbatore edition, he said the publication aimed at staying relevant for the readers of tomorrow.

Stating that the employees of The Hindu were “one family,” he said the mission of the HR department was to “nurture excellence.”

“It is a moment of pride that reading The Hindu is a 50-year-old habit in Coimbatore for many,” said D Suresh Kumar, Deputy Resident Editor (Tamil Nadu), The Hindu. The event held at Hotel Le Meridien saw the enthusiastic participation of the family members of the employees in the cultural programmes, such as music and dance.

An Isai Kadhambam People’s Concert (music concert), by Udalveli Arts Foundation, and a dance performance by Wingerz team of Hindusthan College of Arts and Science, were among the highlights of the event.

A day after consultations with the State’s stakeholders over the proposed amendment of the Constitution’s sixth schedule, Anand Sharma, who chairs the parliamentary standing committee on home affairs, said on Sunday the panel would submit its observations by March. The amendment bill, currently under the review of the committee, seeks to increase the executive and […]

Election Commission: No manhandling of EVMs in Uttar Pradesh

The Election Commission of India (ECI) on May 21 denied the allegations of mishandling of Electronic Voting Machines (EVMs) at various places in Uttar Pradesh ahead of the vote counting on May 23. The EC said the issue reported from Ghazipur, pertaining to “having a watch on polled EVM strongroom by the candidates” was resolved […]

There has been no response from civil society organisations to the invitation from Manipur Chief Minister N. Biren for negotiations on a collective effort “to protect Manipur’s interests”. Manipur has been reeling under burgeoning protests against the Citizenship (Amendment) Bill, 2016 and the pending Naga agreement. Mr. Biren said on Tuesday that he was ready […]