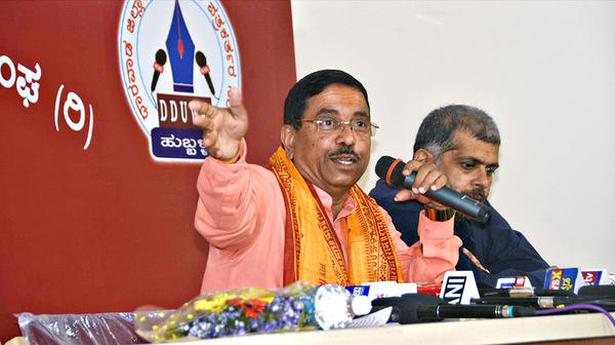 BJP candidate from Dharwad Lok Sabha Constituency Pralhad Joshi, who is seeking a fourth term, has said that there is more politics than water in the Mahadayi river water sharing row.

Speaking at a “Meet The Press” programme organised by the Dharwad District Union of Working Journalists here on Friday, Mr. Joshi said that much had been said on the Mahadayi issue and now the talk was about getting a gazette notification on the verdict of Mahadayi Water Disputes Tribunal. “Both Goa and Karnataka governments have filed appeals and clarification applications on the verdict. And, if those in the State government provide information on any provision under which the Centre could issue gazette notification during pendency of appeals and clarifications, we will make efforts to get it issued,” he said.

“Although I would not say I have resolved every issue, I have the satisfaction of addressing several issues and contributing to the development of his constituency. And, I am seeking re-election based on my performance,” he said. Responding to the allegation that he was seeking votes in the name of Mr. Modi, Mr. Joshi said: “Since we don’t have Presidential type of elections where people directly vote for the President, the people have to elect MPs who support an able and strong leader like Prime Minister [Narendra Modi]. As I seek votes for my performance, I also seek votes for Mr. Modi,” he said. Mr. Joshi said that the under Corporate Social Responsibility (CSR) programme, he had got 42 classrooms built, hundreds of smart boards provided to government schools, over 15,000 desks provided to schools and 564 hitech toilets had been built.

On his plans for the next five years, he said that there was a plan to get rural roads developed under Pradhan Mantri Gram Sadak Yojna on a 75:25 (Centre:State) cost-sharing ratio, micro irrigation schemes, development of bypass roads for Hubballi-Dharwad and others.

On the allegation that he was behind snubbing Lingayat leaders in the BJP, he said that the people of the constituency would respond to such allegations. Mr. Joshi blamed the State government for failing to execute the Smart City project properly and said that even in the case of 24 x 7 water supply project, the State had rescinded the tender without any reason. In the Hubballi-Ankola railway line project too, lethargy of the State government resulted in a new hurdle for the project, he said. DDUWJ president Ganapathi Gangolli was present.

The Delhi High Court on Wednesday granted interim protection from arrest to Ratul Puri, nephew of Madhya Pradesh Chief Minister Kamal Nath, till August 20 in a money laundering case linked to the AgustaWestland Chopper scam. Justice Sunil Gaur said the Enforcement Directorate is at liberty to ask Mr. Puri to join the investigation. The […]

In September 2018 when election strategist Prashant Kishor had officially joined Janata Dal (United), party president and Bihar Chief Minister Nitish Kumar had said, “he is the future” but, Mr Kishor’s recent remarks has landed him in a soup with his position in the JD(U) in a jeopardy. During an interview in private news channel, […]

Less than a fortnight after Congress president Rahul Gandhi promised minimum annual income of ₹72,000 for 20% poorest families in India, the party’s Arunachal Pradesh unit has offered ₹5,000 per month for every graduate unemployed youth of the Frontier State. State Congress president Takam Sanjoy, who is contesting the Lekang Assembly seat, said this would […]