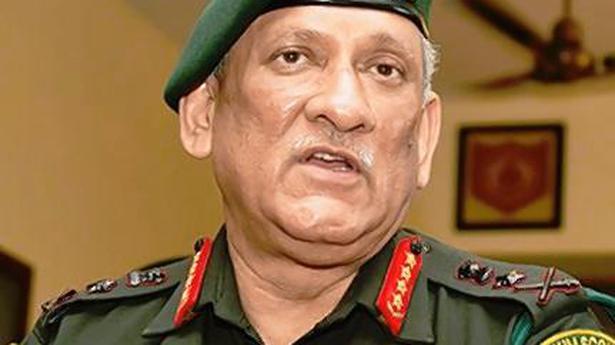 There is normalcy in Kashmir and people are moving around on their work, the Chief of the Army Staff, General Bipin Rawat, said here on Wednesday.

“Normal life in Jammu and Kashmir has not been affected. People are doing their necessary work, a clear sign that work has not been stopped and people are freely moving around. Those who feel that life has been affected are the ones whose survival depends on terrorism,” he told presspersons after presenting the President’s colours to the 29th and 30th battalions of the Punjab Regiment in Ramgarh.

Gen. Rawat said brick kilns were functioning normally while trucks were transporting sand. Shops were open. This showed that life was normal in the Valley. The Army had released videos a couple of days ago taken from drones showing apples being harvested and trucks moving with them. Communications have been partly restored in Kashmir, which has seen total blackout since August 5. Landline phones have been restored recently while mobile and Internet remain shut.

Congress leader Milind Deora on Tuesday described as “unfounded” speculation of his future political path, after the exchange of tweets between him and Prime Minister Narendra Modi on the latter’s US visit. Milind Deora had triggered speculations about his future political role after he praised Mr. Modi’s address in Texas as a momentous first for […]

‘Issue should be brought to its notice’ Source: thehindu.com Related

COVID-19 | Number of cases in West Bengal rises to 9

The number of COVID-19 cases in West Bengal increased to nine as the State witnessed a near-total lockdown following the advisory issued earlier by the State government. COVID-19 | Interactive map of confirmed coronavirus cases in India Two new cases surfaced on Tuesday; both patients have a history of foreign travel. While one person returned […]