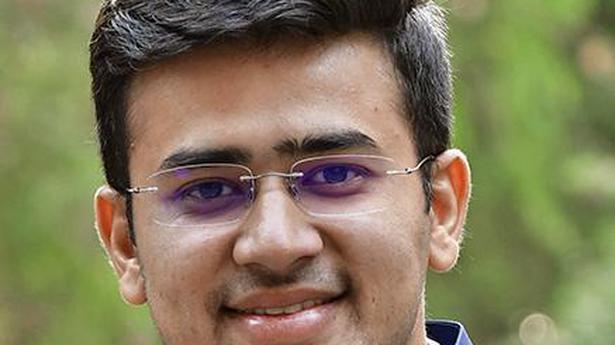 The Karnataka High Court on Friday said that a temporary injunction order passed by a city civil court on March 29 did not prevent the 49 defendant newspapers, television channels, and social media platforms from publishing or telecasting any news item which was not defamatory in their opinion about BJP’s Bangalore South parliamentary candidate Tejasvi Surya L.S.

A Division Bench, comprising acting Chief Justice L. Narayana Swamy and Justice P.S. Dinesh Kumar, made the observations while disposing of a PIL petition, filed by the Association for Democratic Reforms (ADR), New Delhi, questioning the temporary injunction order passed by the city court on a suit filed by Mr. Tejasvi.

“The trial judge has restrained the defendants from making ‘defamatory statements’ against the plaintiff [Mr. Tejasvi]. What is ‘defamatory’ can be tested and decided only if an act of making a statement or telecasting a programme is challenged by the aggrieved person before an appropriate forum. Therefore, in our view, the defendants are not prevented from publishing or telecasting any news item which is not defamatory in their opinion,” the Bench observed.

“In case the plaintiff is aggrieved by any such publication or telecast of any news item, he may approach the Election Commission of India (ECI),” the Bench further observed while also noticing that the petitioner’s counsel was right in his submission that voters had right to know all information about all contesting candidates.

‘Not a party in suit’

The court also took note that ADR, the petitioner, was not a party in the suit filed by Mr. Tejasvi, who had sought injunction against media houses after a rival political party tweeted about his conduct, based on a tweet by a businesswoman about him.

Mr. Tejasvi had claimed before the civil court that persons inimically disposed against him were using the tweets to tarnish his image through various media platforms though she had deleted the tweets leaving a message stating that she did not want to allow political parties to use her tweets for their agenda.

The ADR contended that the civil court should not have passed the “gag order” as it prevented flow of information to the voters while also seeking a direction to the ECI to enforce the already existing norms in respect of publication of information and opinions about the contesting candidates.

The civil court had restrained the defendant media houses “from making defamatory statements against the plaintiff in any manner in electronic or print media as prayed in the interlocutory application-1 [seeking temporary injunction] till defendants appear and file their objections…” while fixing May 27 as the next date of hearing on the suit.

Congress leader Hardik Patel, who walked out of the Sabarmati central jail here on Thursday, a day after he was granted bail in a sedition case, was immediately arrested by the Gandhinagar district police in a 2017 case of addressing a rally without police permission, an official said. A local court in Ahmedabad had on […]

As super cyclone ‘Fani’ moved menacingly towards Odisha, skirting along the Visakhapatnam coast, the port city received light to moderate rainfall, accompanied by strong winds, on Thursday. For the second day, the sea was very rough with high tides lashing the shore. Though there was not much rain, high velocity winds disrupted life to some […]

In a report released this month, the World Bank has predicted a ‘dire’ situation for South Asia due to the economic impact of measures to counter the novel coronavirus pandemic, suggesting that the eight SAARC countries (Afghanistan, Bangladesh, Bhutan, India, Nepal, Pakistan, Maldives and Sri Lanka) will experience their worst economic performance in 40 years, […]