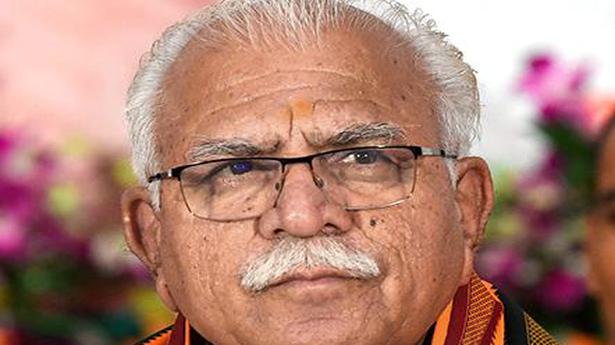 As Haryana goes to vote on October 21, the incumbent Chief Minister Manohar Lal Khattar’s political skills will be put to test with the ruling Bharatiya Janta Party (BJP) fighting the electoral battle to retain power in the State. In an email interview to The Hindu, Mr. Khattar dismissed the view that there’s any challenge to the BJP from the Opposition — be it the Congress, Indian National Lok Dal or its offshoot the Jannayak Janta Party in the upcoming Assembly polls, as they do not have any genuine issue to raise and are in a complete state of disarray.

Do you think after five years in power, the BJP will face anti-incumbency in Haryana?

We are a pro-people government and have formulated and implemented policies in favour of the public, hence we are facing pro-incumbency. We have given a government where the work has been done without discrimination or favouritism.

The BJP has not indulged in regional bias but carried out all-round development across the State. People who have benefitted from our government policies are far more in numbers than those who are discontented.

The Opposition has alleged that the figure of unemployment in Haryana is over 20 lakh. How do you react to that?

The unemployment numbers which they have been flashing are sketched by a private company associated with the Congress Manifesto Committee.

How do you expect anyone to believe in a well-staged political stunt? Our government has given at least one lakh government jobs – around 70,000 were given through the Haryana Public Service Commission and State’s Staff Selection Commission. Nearly 30,000 jobs were given in Boards, Corporation etc. Another at least five lakh jobs were created in the private sector.

You had recently said that the National Register of Citizens (NRC) will be implemented in Haryana. If you form the next government will you prepare NRC soon after assuming power?

The NRC issue is a national issue and it is very important from our internal security perspective. Identifying illegal immigrants in the State is our responsibility.

Our government is committed to NRC and we will ensure that no illegal migrant is included in it and no Indian is left out. In the interest of nation and society whatever work is needed to be done, the BJP shall do it.

The BJP is being accused of using nationalism as a poll plank to divert public attention from its non-performance? What do you have to say?

Our party is a nationalist party and our ideological framework takes national security as a top priority. No government from the past has been able to bring a sense of pride and imbue every citizen with a sense of nationalism.

We are proud that our party turned impossible to possible by creating history on August 5 by abrogating Article 370.

The Congress in its manifesto has promised to waive off farmers’ loans? Do you think this will dent the BJP’s electoral prospects as the party has been against it?

First of all our party does not function on a dole model, unlike the Congress party, We believe in creating an ecosystem where people are walking towards being self-sustainable.

Having said that we have ourselves given waivers to the tune of ₹4,627.74 crores (₹1935.07 crore through Fasal Bima Scheme plus ₹2692.67 crore through the Revenue department) as compensation to farmers.

The BJP in its manifesto has promised to ensure the welfare of all sections. How much financial outlay will be required to fulfil your promises? How will you arrange finance for this.?

Also due to the business-friendly environment in the past five years Haryana has seen investments of around ₹80,000 crore, which is the highest for a five-year period.

Former Chief Minister Bhupinder Singh Hooda has accused the BJP of indulging in political vendetta against him and misusing the CBI, ED. How do you react?

The people of Haryana had lost hope before 2014. Our party had promised that we would bring the corrupt to justice and take out whatever public money they had stacked. Had we misused the agencies, many of these leaders would have been in jail by now. The law is taking its course, you can’t call it misuse.

The ED has recorded the statement of Videocon Group chief Venugopal Dhoot, who is under investigation in connection with the alleged sanction of loans to group companies during the tenure of Chanda Kochhar as the managing director and chief executive officer of ICICI Bank. The agency had earlier recorded statements of Ms. Kochhar and several […]

With the neighbouring Telangana registering its first case of COVID-19 (novel coronavirus), the Andhra Pradesh government has gone into the alert mode, and reviewed the preventive measures required, the arrangements in place to identify persons with a history of travel to the affected countries/places, and create awareness among the people. The development in Telangana has […]

Not a single ST faculty in Govt. law colleges: HC

In a judgment that could not have come at a better time than the election season, the Madras High Court on Wednesday criticised political parties, which claim to be championing the cause of social justice, to have overlooked the fact that not even a single Scheduled Tribe (ST) candidate had been appointed as a faculty […]