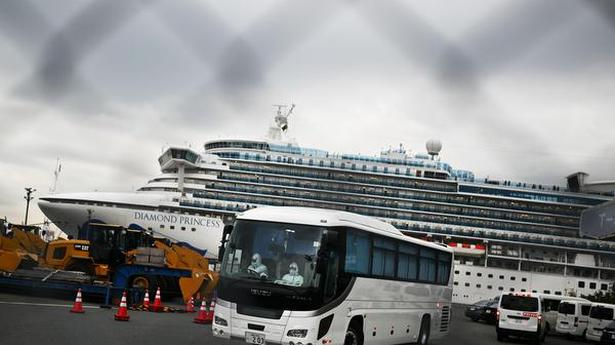 A third Indian crew on board a cruise ship off the Japanese coast has tested positive for the novel coronavirus, the Indian Embassy in Japan said on Friday as authorities confirmed that 218 people have been infected with the deadly virus on the quarantined ship.

The cruise ship Diamond Princess with 3,711 people on board arrived at the Japanese coast early last week and was quarantined after a passenger who de-boarded last month in Hong Kong was found to be the carrier of the COVID-19 on the ship.

A total of 138 Indians, including 132 crew and 6 passengers, were on board the ship.

The Indian Embassy in a statement said three Indian crew members are among 218 people tested positive for the virus.

“All 218 people, including Indian nationals have been taken to hospitals for further treatment and quarantine. As per information available with the Embassy, no other Indian national on-board Diamond Princess Cruise ship has developed any symptoms of infection,” the statement said.

Congress legislator Vishwajeet Kadam suffered minor injuries in a car accident in Pune late on Wednesday. Dr. Kadam, an MLA from Sangli’s Palus-Kadegaon constituency, was fortunate to have averted a major road mishap after his car rammed into a tree, injuring him and his driver while severely mangling the vehicle. In a statement issued on […]

A science teacher from the Government High School at Bandarwad village in Afzalpur taluk of Kalaburagi district has brought laurels to the district by Source: thehindu.com Related

Prime Minister Narendra Modi on Saturday asked the people of Arunachal Pradesh to vote for a ‘chowkidar’ (watchman) who would provide security to the country even as he attacked Opposition parties, claiming they were “disheartened” by India’s growth and success. Kicking off his campaign in Aalo for simultaneous Lok Sabha and Assembly polls in Arunachal […]