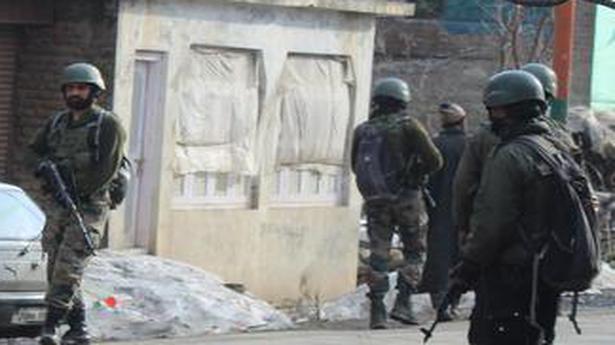 Three militants were killed in an encounter with security forces in Jammu and Kashmir’s Shopian district on Thursday, an Army official said. The security forces launched an anti-militancy operation in Yarwan forest area of the district following information about presence of the ultras there, he said.

The official said three militants were killed in the operation, which was underway till last reports came in.

The body of Tanveer Ahmad Dar, a resident of Bemnipora, from Shopian’s Kachdoora area. “Mr. Dar was killed by militants. The police have registered a case and officers are at the spot and continue to work to establish circumstances of this terror crime,” said the police.

(With inputs from Our Correspondent)

Koraput villagers use own funds to construct irrigation system

​“Efficient delivery systems providing equitable, affordable and easily accessible healthcare is at the heart of all our efforts,” said Union Health Minister Harsh Vardhan inaugurating the 2019 World Conference on Access to Medical Products Achieving the SDGs 2030 here on Tuesday. He said the discussions and knowledge sharing from this world conference need to be […]

Farmers’ leader P Ayyakannu on Monday said that the State government must adopt a resolution in the Legislative Assembly declaring the Cauvery delta a Protected Special Agricultural Zone, a move that Chief Minister Edappadi K Palaniswami had announced recently. ​ Mr Ayyakannu, leader of a collective of farmers for the interlinking of national and south […]