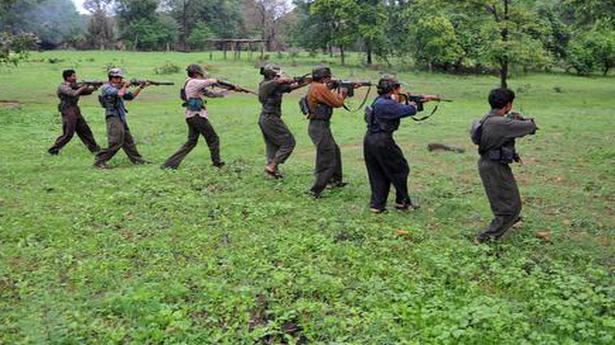 The Kerala Police said that they had either injured or killed at least three suspected Maoists in a gun battle between the armed irregulars and Thunderbolt commandos in Agali forests in Palakkad district early on Monday.

Top officials told The Hindu that the Maoist casualties could include two men and a woman. The police are yet to establish their identities or recover their bodies.

The police have suffered no casualties in the firefight that unfolded sporadically in the dense forests of Manjakatti in Manarcaud forest division.

Officials privy to the operation said the commandos have the area under their control.

The Agali police were on their way to the spot to secure the bodies, collect evidence, map the crime scene, possess the weapons used by commandos and the insurgents for a forensic ballistic examination of the firearms.

The firefight came against the backdrop of increased activity by various ‘dalams’ of the Western Ghats Zonal Committee of Maoists in Wayanad and Palakkad districts to highlight their presence and deter government agencies from operating in the tribal settlements there.

According to initial reports, the Thunderbolts were on an area domination patrol and holding high ground when they sighted the ‘heavily armed’ irregulars. The commandos reportedly called out to the group to surrender. However, they encountered heavy fire from the thick undergrowth.

Officials here said the commandos fanned out in battle order, established a skirmish line and returned fire. They tried to pin down the insurgents in a bid to force the alleged Maoists to surrender.

The shoot-out had occurred in poor visibility conditions. The ‘Thunderbolts’ are known to carry night vision equipment and GPS and rations for long-endurance patrols in forests.

Officials said some Maoists could have broken out of the encirclement and moved to contagious forests in Karnataka or Tamil Nadu.

The Kerala police have alerted their counterparts in both the States. The Thunderbolts were in pursuit. They were proceeding with caution so as not to get ambushed by possible booby traps laid by retreating Maoists.

Meanwhile, the police are scouring tribal settlements and hospitals and clinics in Palakkad and Wayanad to find out whether there are more wounded Maoists.

The State government is likely to order a magisterial enquiry into the incident.

The police had engaged Maoists in Vythiri in Wayanad in March this year, killing one, C. P. Jaleel, 29, as they retreated from a forest resort into the jungle. In 2016, Thunderbolt commandos shot dead Maoist leaders Ajitha and Kuppu Devaraj in the Karulal forests in Nilambur in Malappuram district.

The air intelligence unit of the Customs department on Wednesday seized 278.83 gm of gold from two passengers at the Biju Patnaik International Airport here, Customs officials at the airport said. The value of the seized gold is ₹ 9.08 lakh, said the officials who intercepted the two passengers. The passengers, hailing from West Bengal […]

Aspirants demotivated as APPSC defers it for the fifth time Source: thehindu.com Related