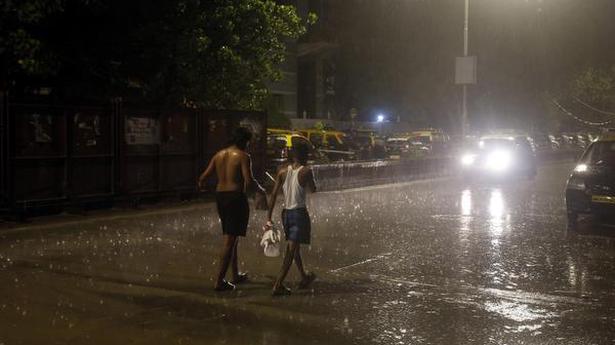 It started raining in many parts of the city after 8.30 p.m. though IMD termed the downpour as not monsoons but rains due to cyclonic activity.

Mumbaikar’s took to social media putting up videos and posts of heavy rain accompanied by thundershowers and lightning from across the city. They also reported waterlogging in Malad’s Link Road, Mith Chowky, and S.V. Road in Andheri.

The weather affected operations at the airport too. “No flights have landed at the airport since 9.50 p.m.,” said a Mumbai International Airport Pvt. Ltd. spokesperson. A United Air flight from Newark scheduled to land in Mumbai was diverted to Delhi. All other incoming flights were put on a holding pattern and were circling Mumbai. Landings resumed at 10.45 p.m. with an Indigo flight from Hyderabad being the first to touch down.

The stormy weather threw suburban railway out of gear too. On the Harbour line, the over head equipment tripped between Bandra and Mahim affecting services on the slow line of Western Railway for around 15 minutes.

Meanwhile, a 20-year-old man was rescued by lifeguards at Girgaum Chowpatty on Monday evening. The man, identified as Vishal Bhogavale was spotted drowning about 100 feet away from the seashore. Alert lifeguards jumped to his rescue and after which he was shifted to BYL Nair Hospital. “The patient was brought in at around 8 p.m. and was administered nasal oxygen and first aid. He is now stable and conscious,” a resident doctor on-call at the hospital said.

Two children died of electrocution in Mumbai’s Kandivali area. The incident happened around 10.50 pm in Poisar’s Vimladevi Chawl. Fire brigade, police turned up at the spot and two children identified as Tushar Jha (11) and Rushabh Tiwari (10) were rescued. They were moved to Shatabdi Hospital where they were declared dead.

ED findings made part of CBI FIR in Amnesty case

The Enforcement Directorate’s findings in its probe against the Amnesty International India Private Limited (AIIPL) and related entities have been made part of the case registered by the CBI alleging violation of the Foreign Contribution Regulation Act. The Union Home Ministry had first raised the issue with the RBI on May 23, 2018. Subsequently, through […]

If people decide, a strong man too can be defeated: Jadhav

BJP candidate from Kalaburagi Lok Sabha Constituency Umesh Jadhav has said that if people decide, even a strong man can be defeated in an election. He was reacting to Congress leader and MP M. Mallikarjun Kharge’s remarks that he is a strong man and that nobody can defeat him. Mr. Jadhav was talking to reporters […]