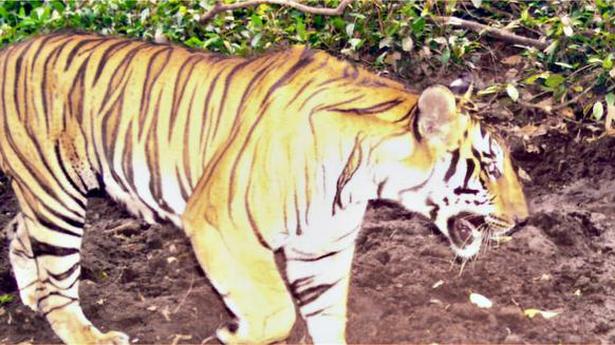 A tiger has been spotted at Goa’s only national park, Bhagwan Mahaveer National Park in South Goa, the State forest department said in a statement on Saturday.

“The camera has recorded the presence of a tiger in Bhagwan Mahaveer National Park for the first time on May 14. This indicates that level of protection, quality of wildlife habitat and wildlife management practices in the national park are of high levels,” the statement by Range Forest Officer Paresh Porob said.

It said that the forest department staffers were trying to track down the elusive cat for over a year at the park, which is spread over 240 square metres

Mr. Porob said on Saturday that the exploration was part of scientific documentation of the national park.

“The tiger was recorded in the core area of the national park. High-level protection has provided ideal habitat for the monitoring of big cat being conducted by the field staff,” said Mr. Porob.

This is the second major tiger spotting in the State. Tiger presence was earlier recorded in Mhadei Wildlife Sanctuary in North Goa.

Late chief minister Manohar Parrikar had told the Goa Legislative Assembly last year that no “final decision” had been taken as far as setting up a tiger reserve in the State was concerned, even though National Tiger Conservation Authority had mooted a proposal for constitution of tiger reserve in Goa after the All-India Tiger Estimation survey in 2014.

‘Time to give women their due in Assemblies and Parliament’

Even as two senior ministers in the Maharashtra government have expressed divergent views on providing free electricity to people who consume up to 100 units of power, city-based economist H.M. Desarda on Wednesday supported the feasibility of such a measure on the lines of the one in Delhi. State Power Minister Nitin Raut had last […]