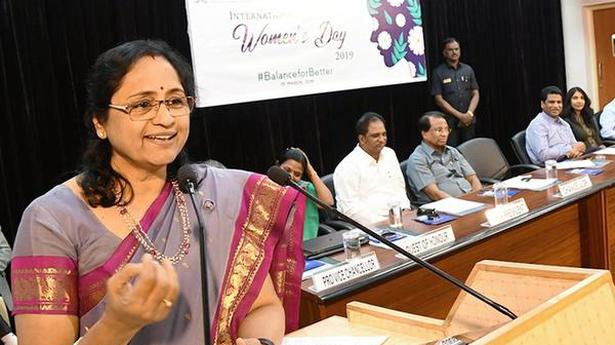 Ms. Chunduru said that India possessed a better culture of encouraging women without judging them based on their looks and complexion. She pointed out 33% of Indian Bank employees were women. “Empowerment is something that is in us. It will be achieved through proper education, freedom and equality in thinking,” Ms. Chunduru said.

Ms. Chunduru distributed prizes to winners of various events conducted by VIT as part of Women’s Day celebrations. G. Muthazhagi, Vice President, Delivery and Support (ERP), Ramco Systems and a former student of VIT, appealed to the students to acquire the best of knowledge and enrich themselves with soft skills to achieve their dreams.

VIT Founder-Chancellor G. Viswanathan said that women formed 49% of India’s population and were the backbone of savings in the country. At present, they constituted only about 7 to 8 % in Legislative Assembly in the State, 10 % of the judiciary strength in High Courts and among legislators in Lok Sabha and Rajya Sabha – the lower and upper houses of Parliament, the number was only 12 and 11%. The Chancellor said that everyone in the country was talking about empowerment of women and though the Bill was introduced in 1996 to provide one-third representation to women in State Assemblies and Parliament, it has been pending for the past 22 years. Despite all parties extending their support to the Bill, it was yet to be passed, Mr. Viswanathan said, adding that it was time to honour the women of India and to give them their due place. To make this happen, it has to begin with women’s education, he added.

A total of 36,000 students from the Vellore campus of VIT pay their fees through branch counters at a higher cost and they will benefit from the move.

As many as 50 students of two government schools in Odisha’s Jajpur were taken ill after consuming mid-day meal on Saturday, officials said. The first incident occurred at Sibantpur Upper Primary School under Haridaspur panchayat of Dharmasala block, they said. The meal was served at about 10 am in the school and about 40 students […]

Mugilan taken into custody at Katpadi

Nearly six months after he vanished upon boarding a train to Madurai from here, environmental activist T. Mugilan alias Shanmugam was detained by the police at the Tirupati railway station on Saturday. Soon after a video of Mr. Mugilan raising slogans in police custody went viral on social media, his son Kaar Muhilan confirmed to […]

Non-BJP parties take out a joint rally in Adilabad against CAA, NRC

A large number of protesters, waving the tricolour in Adilabad town, on Thursday, demanded scrapping of the Citizenship Amendment Act (CAA) and National Register of Citizens (NRC). The rally was taken out jointly by the Telangana Rashtra Samithi (TRS), Congress, Left parties, and the Majlis Ittehadul Muslimeen (MIM), under the banner of the Joint Action […]