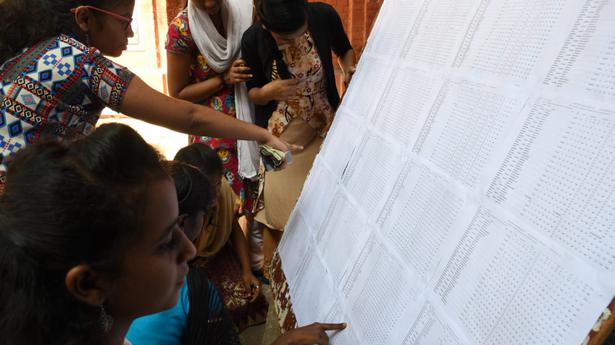 The Tamil Nadu Higher Secondary Certificate (HSC) examination results were declared on Friday with the State securing an overall pass percentage of 91.3% compared to the 91.1% which was recorded last year.

The students who took up the board exams in March were the first batch to write board exams for three consecutive years after the school education department brought in public exams for class 11 as well.

Nearly 8.69 lakh school students as well as private candidates across the State had registered to take up the examinations, which concluded on March 19.

In the new examination pattern, which was implemented this year, students wrote papers for 100 marks for two-and-a-half hours.  For papers such as Language and English, they wrote a combined single paper instead of two separate ones.

The State education department has done away with the practice of announcing the name of the toppers to ensure the students are not pressurised.

Students can view their results at http://tnresults.nic.in/

A high security alert has been sounded in Gujarat after intelligence agencies shared inputs about the possibility of Pakistan-trained commandos entering the Gulf of Kutch in Gujarat from the Harami Nala creek area. The Border Security Force (BSF) found two single-engine Pakistani boats abandoned in the ‘Harami Nala’ area and a search operation had been […]

The Central Bureau of Investigation on Saturday formally took over the probe into the sensational Pollachi sexual abuse and blackmail case. The central agency, which took over the case on a recommendation from the State government, has registered two FIRs in the case. While one FIR is based on the complaint of a college girl […]