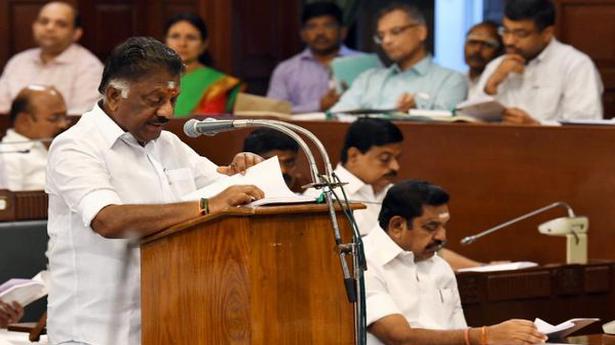 Tamil Nadu’s fiscal deficit is estimated to be 2.84% for 2020-21, well below the 3% fiscal norms while the State’s revenue deficit is likely to double to ₹21, 617.64 crore compared to the projection of ₹10,040.31 crore, Deputy Chief Minister and State Finance Minister O. Paneerselvam said.

Presenting the annual State budget for 2020-21 in the State Assembly on Friday, Mr. Panneerselvam said the State continues to see a sustained increase of its revenue deficit. The burden imposed on the State finances by the take-over of debt of Tangedco under the UDAY scheme, the lag effect of the implementation of the 7th Pay Commission, slower growth in tax revenue are causing rise in revenue deficit.

Mr. Panneerselvam said the ‘unprecedented’ drop in the share of Central taxes further burdened the State which is already severely affected by the devolution criteria adopted by the 14th Finance Commission.

He also said the government will shortly launch a New Industrial Policy which will provide GST regime compatible incentives.

(With inputs from Dennis S. Jesudasan)

Pakistan makes progress on FATF goals, may get a reprieve from blacklist

Pakistan appeared to make some progress on convincing members of the global watchdog FATF (Financial Action Task Force) of its efforts to curb terror financing at a key meeting in Beijing on Thursday. A final decision on its “greylist” status is expected next month. According to sources, Pakistan was cleared at the Asia Pacific Group […]

A wild tusker, which was in a village farm near Gurupura in Hunsur, is battling for its life after collapsing owing to suspected dehydration and stomach infection. It was initially speculated that the elephant, believed to be around 15 years, suffered electric shock on coming in contact with a live wire and collapsed. But veterinarian […]