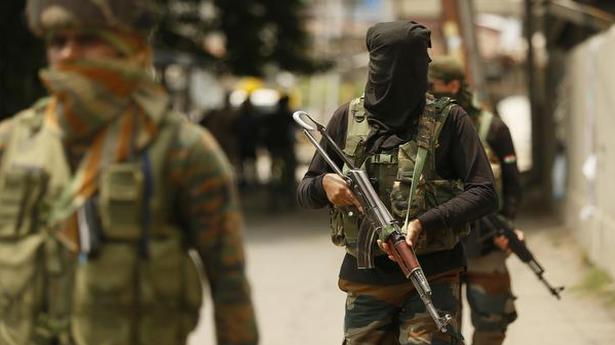 Concerned over a spurt in incidents of weapon-snatching by militants, the Jammu and Kashmir Police will procure 4,000 weapon safety systems known as Smart Electronic Trigger Lock Weapon Tracking System (SETLWTS) to deal with the menace.

According to reports, more than 200 weapons, including AK-47s, self-loading rifles (SLRs) and INSAS rifles, besides a large number of ammunition were snatched by the militants in the State during the past three years.

The State police recently floated tenders for purchasing the 4,000 Weapon Safety System vehicles to ensure the safety of its arms and ammunition.

According to the specification, the WWSs must have trigger-based locking units with GPS trackers so that they cannot be misused and can be speedily traced, he said.

Such devices should also be compatible with fire arms and could be removed only by the biometrics of authorised users. Any forcible removal will damage the whole trigger mechanism system.

Blaming overindulgence in use of smartphones by police personnel for the spike in gun-snatching incidents in the Kashmir Valley, the police had last year banned the use of such gadgets by its sentries during duty time.

The order, issued by Additional Director General of Police (ADGP) A.K. Choudhary, had said the tendency not only lowers the image of the police, but also compromises the personal security of individuals.

The incidents of weapon-snatching have increased in the Kashmir Valley, especially south Kashmir, after the killing of Hizbul Mujahideen commander Burhan Wani in July 2016, officials said.

As militant recruitment increased in 2017 and 2018, reports suggest that there is a shortfall of weaponry among the militant ranks, they said.

Also, 39 INSAS rifles, 119 INSAS magazines, 380 INSAS bullet rounds, four carbines, 70 carbine rounds, one .303 rifle and one LMG were snatched by the militants during the period.

The Lok Janshakti Party, a key constituent of the NDA, is likely to go it alone in the Jharkhand Assembly election as the BJP is yet to respond to its demand for six seats. The LJP may contest in 37 seats. The LJP made public its dissatisfaction on a day when the BJP lost its […]

Congress cadre led by District Congress Committee president Manala Mohan Reddy, here on Tuesday, paid homage to former Prime Minister Indira Gandhi on the occasion of her 103rd birth anniversary by garlanding her statue and portrait. They observed a two-minute silence in her memory. Speaking on the occasion, Mr. Mohan Reddy said that Indira Gandhi […]