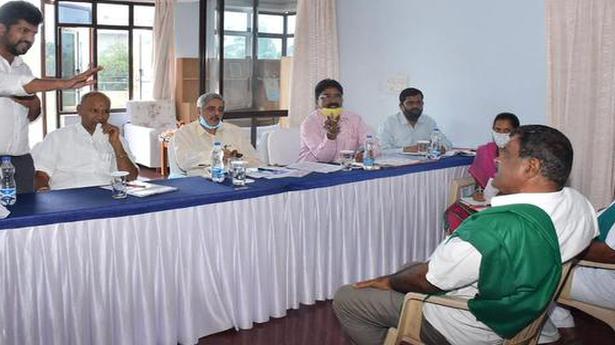 Chairman of Tobacco Board Y. Raghunadha Babu has assured the tobacco farmers of Mysuru region that he will soon convene a meeting with traders and convince them to increase the price of tobacco they were purchasing from the farmers.

Mr. Babu was addressing tobacco farmers, who had gathered at the Regional Office of Tobacco Board in Mysuru on Friday, to voice their concern over the falling prices of the commodity ever since the auction season began in early October.

He expressed confidence that merchants and representatives of global cigarette manufacturing companies will honour the Board’s appeal and urged the tobacco farmers not to panic.

Farmers in Mysuru region were up in arms against the government over the collapse of tobacco prices, particularly the medium and low grade varieties, making a huge dent in their earnings. The low grade variety of tobacco, which used to fetch more than ₹ 100 per kg, is now less than ₹70 to ₹80 per kg, which had substantially brought down the average price of tobacco during the ensuing season, the farmers complained.

Though Mr. Babu attributed the fall in prices to poor global demand for tobacco in the light of COVID-19, the farmers said the traders were exploiting the situation to increase their profit margins at the expense of the farmers.

A large percentage of tobacco cultivated in Karnataka is exported abroad, particularly to the European countries, which are presently reeling under the impact of COVID-19, which affects the lungs. The medical fraternity is also cautioning the public against smoking, which also affects the lungs, he said.

However, Mr. Babu said the situation in Karnataka was still not as bad as the condition of tobacco farmers in neighbouring Andhra Pradesh, where auction season had coincided with the peak of COVID-19 in April. The Andhra Pradesh government was forced to intervene in the market and purchase about 13 million kg of tobacco through Andhra Pradesh State Cooperative Marketing Federation (Markfed).

Mysuru MP Pratap Simha, who also participated in the meeting, said traders were not even maintaining the prices they offered at the start of the auction season, let alone increasing them. He urged the Board Chairman to hold the traders accountable to the prices they had quoted while giving an indent at the time of crop size fixation.

The Board, based on the indent submitted by the traders, had fixed the crop size for Karnataka at 88 million kg. But, in view of excess production, the tobacco output is expected to cross 95 million kg this year.

With the traders refusing to purchase low and medium grade tobacco, Mr. Simha said the farmers are forced to incur additional expenditure on transport of rejected tobacco bales from the auction platforms back to their farms and bring them back repeatedly.

Former MP C.H. Vijayshankar, who was also participated in the meeting, urged the Board authorities to ensure that the tobacco auction season culminates by February and not stretched till April-May next year.

Manjunath, Regional Manager of Tobacco Board, Mysuru, said a total of 24 million kg of tobacco had been auctioned till now.

BJP not to form government in Maharashtra, blames Sena for disrespecting mandate

A day after Governor Bhagat Singh Koshyari invited BJP to form the government in Maharashtra, the State unit of BJP on Sunday evening informed after the core committee meeting that the party is unable to form the government as it does not have required number of 145 MLAs. BJP state president Chandrakant Patil after meeting […]

Union minister Giriraj Singh on Tuesday surrendered before a local court in a model code of conduct violation case for making controversial remarks against the Muslim community at an election rally in the state. The firebrand BJP leader surrendered before the court of Chief Judicial Magistrate Thakur Aman Kumar here. The CJM granted bail to […]

COVID-19: Retreat event at Attari-Wagah border to be conducted without spectators, says BSF

People will not be allowed to attend the popular daily retreat ceremony between India and Pakistan at the Attari-Wagah border in Punjab in view of coronavirus (COVID-19) outbreak, the BSF said on Friday. The precautionary measure will be effective from Saturday. The Border Security Force (BSF) will continue performing the ceremonial duty of lowering the […]