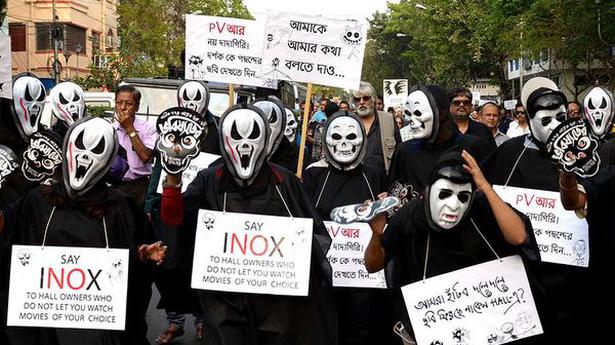 The film was allegedly withdrawn from single-screen theatres and multiplexes a day after its release on February 16. Director of the film, Anik Dutta, has alleged that the owners of the theatres were forced to stop the screening though it ran to packed houses in many places on the day it released.

Legendary actor Soumitra Chatterjee, directors Aparna Sen and Buddhadeb Dasgupta were among those who participated in the protest rally from Madhusudan Manch in Dhakuria to Jadavpur in south Kolkata.

Artistes and technicians, film enthusiasts and students, wore skeleton and ghost masks with slogans demanding an explanation for the recall of the film from cinema halls.

The film’s story revolves around a group of ghosts, including a politician, who assemble at a refugee camp and seek relevance in contemporary times. The film stars Sabyasachi Chakraborty, Moon Moon Sen, Kaushik Sen and, veterans Barun Chanda and Paran Bandyopadhyay.

“This is nothing but fascism,” said actor and director Aparna Sen.

Earlier, an appeal to join the march in the city was issued by Soumitra Chatterjee, Aparna Sen, Tarun Majumder, Buddhadeb Dasgupta and veteran poet Sankha Ghosh.

While 72 patients are under treatment at different hospitals, 35 have recovered and one has died in the State till date Source: thehindu.com Related

Chinna Vasudev Reddy has taken charge as the Vice-Chairman and Managing Director of Andhra Pradesh Digital Corporation. Mr. Vasudev Reddy formally assumed charge on Friday at his chamber in the presence of Additional Chief Secretary, Department of Infrastructure and Investment, Karikal Valavan. Later, he interacted with the officials of the Digital Corporation and discussed the […]