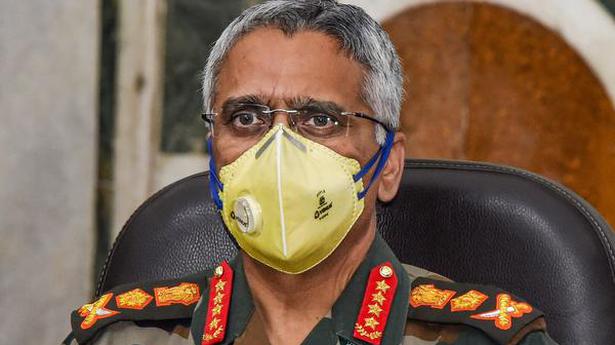 He asserts that there is no shortage of extreme weather clothing or equipment for troops deployed on the front line.

Senior military commanders of India and China were “ironing out the modalities” of how to proceed ahead and we are very hopeful that we will be able to reach an agreement, which is mutually acceptable and mutually beneficial, said Army Chief Gen Manoj Naravane on Tuesday on the situation in Eastern Ladakh.

The Army Chief also asserted that there was no shortage of extreme weather clothing or equipment for troops deployed on the front line.

“We had the 8th round of talks on November 6 between the highest military-level commanders on both sides. They are ironing out the modalities of how to proceed ahead within the overarching guidelines, which had been communicated post the interactions and meetings between the respective Ministers [Defence and External Affairs),” Gen Naravane said at the defence attaché conclave organised by news portal Bharat Shakti.

“It was discussed by the defence ministers that it has to be an overall solution to the entire issue which brought this situation to the fore. Within those guidelines, we are discussing how to actually achieve it on the ground,” he stated.

Defence Minister Rajnath Singh held talks with his Chinese counterpart Gen Wei Fenghe on September 4 in Moscow on the sidelines of the Shanghai Cooperation Organisation (SCO) defence ministers meeting. On September 10, External Affairs Minister S. Jaishankar met his Chinese counterpart Wang Yi in Moscow, where they agreed on a five-point plan for disengagement and de-escalation along the disputed boundary in Ladakh where the stand-off has been on since early May.

On reports that there was shortage of extreme weather clothing for troops deployed in Ladakh, Gen. Naravane said, “There is no shortage whatsoever of any kind. All the troops are equipped with the latest equipment and newest of clothing, equipment and weapons they require…”

Equipment was catered for a certain number of troops at any point of time. The situation that had developed required them to deploy additional troops and it was for these additional troops that they “had to go in for certain emergency procurements.”

Gen. Naravane said that over the years they have been going for indigenous suppliers and out of the extreme weather clothing and equipment, of some 10-12 items, six were done by local suppliers and contract for another four was being done by Indian suppliers. The contract had been signed in July and the first supplies would start by January or February.

Also read: The Hindu Explains | What are the agreements that govern India and China’s actions?

On the Army’s advanced winter stocking, he said that during the summer months, a fair deal of stocking always took place to cater during the road-closure period from November to May. “This is a process we do year on year and it is a quite a well-established procedure. We just had to ramp it up to cater to the additional numbers which were there,” he added.

Hospitals in Rajasthan to provide COVID-19 treatment at govt. rates

Private hospitals in Rajasthan will give treatment to COVID-19 patients at the rates fixed by the State government and increase the number of beds for admitting serious patients. The State government has issued these directions to the hospitals in view of the winter season when infections are likely to increase. Chief Minister Ashok Gehlot, who […]

With the latest commissioning, the Indian Coast Guard has reached a landmark of 150 ships and boats and 62 aircraft. Source: thehindu.com Related

8 dead as van carrying labourers from M.P. falls off bridge in Dhule

Eight persons, including five children, were killed and 23 others were injured on Saturday when a pick-up van carrying labourers from Madhya Pradesh fell off a bridge in north Maharashtra’s Dhule district. The incident occurred shortly after midnight when the van crashed into the rocky bed of the Bori river, Dhule Taluka police station inspector […]