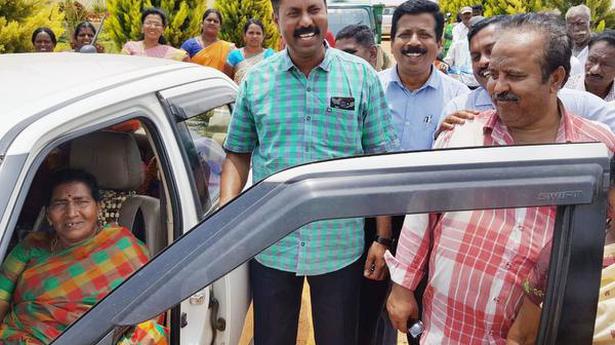 Chikkarayamma, who retired on Tuesday after serving in Arsikere as a municipal worker for last 37 years, had a memorable farewell on Wednesday.

After felicitating her in a programme organised to mark the International Workers Day, Municipal Commissioner G.N. Chalapathi dropped her in his official car at her residence.

Ms. Chikkarayamma had not expected this gesture from the officer. Moved by the respect shown to her, she blessed the officer and wished he continued to serve people of Arsikere for long. She told The Hindu, “I had never anticipated a farewell of this nature”.

She had forgotten what was her first salary. However, at the time of retirement, she was getting ₹33,000.

“I started to work in Arsikere for a small amount as salary and took care of my brother’s family as I did not have children. I am happy for having worked all these years to keep the city clean”, she said.

Mr. Chalapathi, who was transferred to Arsikere from Sidlaghatta ahead of the elections, had invited all workers of the municipality for the programme. “We in Sidlaghatta in Chikkaballapur district felicitate municipal workers on their retirement and drop them home in the official vehicle. I am told for the first time this was done in Arsikere”, he said.

The officer opined that it was his duty to recognize the hard work put in by workers in keeping the city clean.

“Throughout their service, we concentrate on getting work done from them. And, this is the occasion to recognise their work”, he said.

Herd masking — another way to tackle the pandemic