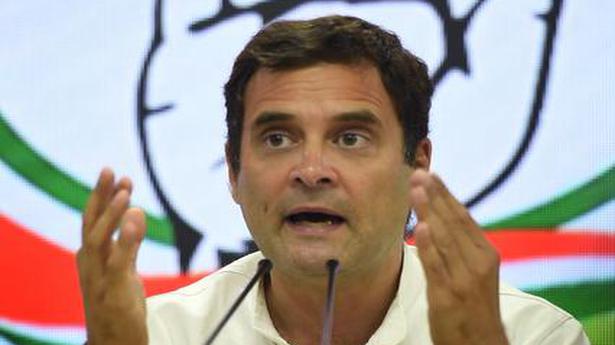 Congress leader Rahul Gandhi on Sunday said the nine-hour traffic ban on the National Highway passing through the Bandipur Reserve has caused hardship to lakhs of people in Kerala and Karnataka, and asked the central and state governments to safeguard the interests of local communities, while protecting the environment.

The movement of traffic through the tiger reserve is banned on this stretch from 9 p.m. to 6 a.m. The ban through the reserve forest was intended to reduce disturbance to wildlife.

Mr. Gandhi, who is an MP from Wayanad in Kerala, expressed solidarity with the youth who are on an indefinite hunger strike since September 25 protesting the ban.

“I stand in solidarity with the youth on an indefinite hunger strike since September 25th protesting against the daily 9 hour traffic ban on NH-766 that has caused immense hardship to lakhs of people in Kerala and Karnataka,” the former Congress President said in a tweet.

“I urge the central and state governments to safeguard the interests of local communities, while upholding our collective responsibility to protect our environment,” he tweeted.

Last month, Kerala Chief Minister Pinarayi Vijayan had batted in favour of an elevated highway through the Bandipur National Park connecting Wayanad in Kerala and Mysore in Karnataka.

The ban has been affecting the people of Wayanad, Kozhikode and Malappuram districts.

A controversy erupted on the floor of the Bihar Assembly on Monday when a legislator from AIMIM insisted that the draft for the oath in Urdu should have “Bharat”, as it is in the Constitution, instead of the seemingly eclectic “Hindustan.” The demand was made by Akhtarul Iman, state president of Asaduddin Owaisi’s AIMIM no […]

The Congress on Monday appointed Ajay Kumar Lallu as its Uttar Pradesh president, replacing Raj Babbar, and revamped the State unit, bringing in four vice-presidents, 12 general secretaries and 24 secretaries. Mr. Lallu was the Congress Legislature Party (CLP) leader in Uttar Pradesh and is a two-time MLA from Tamkuhi Raj constituency. He is considered […]

We need to think about opening up the economy, says Raghuram Rajan to Rahul Gandhi

India will need to test around 1 million people as per current estimates, said economist and former RBI Governor Raghuram Rajan in a conversation with Source: thehindu.com Related