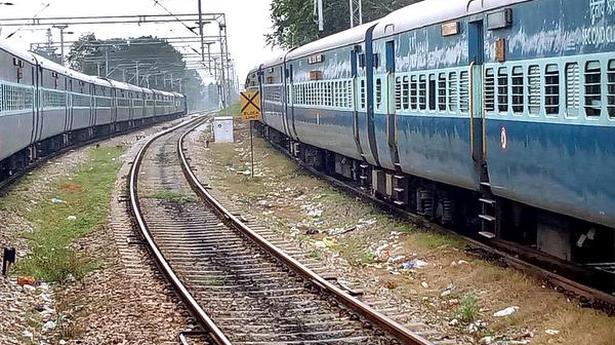 Passengers in the Ajmer – Ernakulam Marusagar Express waiting to alight at Byndoor (Mookambika Road) railway station were in for a surprise when the train instead of stopping went ahead as the train driver forgot to stop it there on March 3 evening.

The Marusagar Express (Train No: 12978) was scheduled to arrive at the Byndoor railway station at 4.26 p.m. on March 3. But it was running late by an hour and was expected to arrive at 5.26 p.m. But the train which arrived (at Byndoor) did not stop there, instead, it passed on leaving both the passengers inside the train and those waiting to board it surprised.

Sudha Krishnamurth, Public Relations Officer, Konkan Railway, told The Hindu on March 3 that later when the Marusagar Express stopped at the next railway station, that is, Kundapur, the passengers waiting to alight at Byndoor, were asked to get down there through the public announcement system on the railway platform. The 16 passengers alighted, were then sent back to Byndoor from Kundapur in two vans, she said.

“This is the first time a driver has failed to stop at a scheduled station on the Konkan Railway. A detailed inquiry would be conducted in this matter and the Marusagar Express train driver will be questioned,” Ms. Krishnamurthy said.

TDP leader, 5 others from Anantapur injured in Sri Lanka blasts

A prominent businessman S.R. Constructions Managing Director Alimineni Surendrababu and five of his friends, who had gone to Sri Lanka on a holiday trip, narrowly escaped from a blast in Shangri-La Hotel, in Colombo on Sunday. While Mr. Surendrababu was injured in his nose, two of his friends too received minor injuries while they were […]