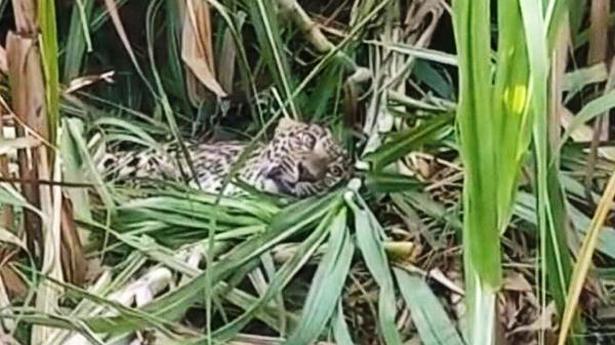 An adult leopard was found caught in a jaw trap at Hampapura, near Keregodu, in the district on Monday.

The feline, which had sustained minor injuries, was released into the Cauvery Wildlife Sanctuary at Kollegal, Chamarajanagar district, after being administered medical treatment.

The incident has worried the Forest Department because using jaw traps is an indication that professional hunters have extended their activities to the district. “This is a first-of-its-kind incident in the district,” said Harish, Range Forest Officer, Mandya. “It is a dangerous trend. It is an act of professional hunters. Jaw traps are placed by habitual offenders. The department will intensify vigilance to prevent the recurrence of such incidents,” he told The Hindu.

Senior officials in the department suspect that poachers had placed the jaw trap in the sugarcane field of a farmer, Jayaswamy, in the late hours of Sunday. The leopard landed in the trap in the early hours of Monday.

Meanwhile, a crowd gathered and expressed anger against the department for the inordinate delay in trapping the animal, which was seen screaming with pain in the jaw trap.

The Enforcement Directorate on Thursday conducted searches on the premises linked to TMC MP K.D. Singh in Delhi and Chandigarh. “These searches have been carried out in connection with a Ponzi scheme and housing fraud,” said a senior ED official. The case allegedly involves ₹1,900 crore. It is alleged that the agency has sent several […]

“Prachar Rath” to promote organic and natural farming in Rajasthan

A “Prachar Rath”, flagged off by Agriculture Minister Lal Chand Kataria on Wednesday, will promote organic and zero budget natural farming (ZBNF) among the farmers in Rajasthan to reduce agricultural input costs, encourage the use of bio-fertilisers, replace pesticides with traditional material and give tips for preparation of indigenous seeds. Flagging off the chariot at […]

State ninth in number of start-ups

Despite the State government’s major thrust to Information Technology (IT) initiatives, Kerala has been ranked only ninth in the total number of recognised start-ups in the country. Figures released by the Department for the Promotion of Industry and Internal Trade (DPIIT) under the Union Ministry of Commerce and Industry show that Kerala has 849 recognised […]