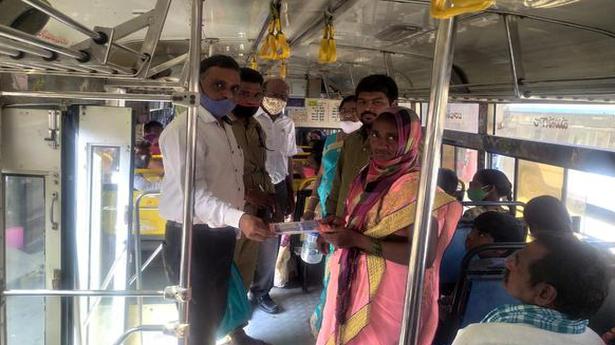 The Nalgonda region of the Telangana State Road Transport Corporation (TSRTC), one of the largest in the State, has taken up distribution of surprise gifts to deliver a message.

Making a concerted attempt to get passengers to return to patronise the public transport service especially during the pandemic situation, TSRTC-Nalgonda has decided to give away surprise gifts on randomly selected routes, depot-wise, on every Monday.

The underlying message of the effort is to get general public to see and acknowledge: “TSRTC-Nalgonda is following all COVID-19 preventive measures; all its routes are operational; and passenger safety is its top priority.”

The region has launched the initiative on Monday at all its seven depots, and passengers were taken by surprise when buses were randomly stopped by officials and their tickets collected. Instead of ticket checking, in such random and usual stops by flying squads, tickets of all the passengers were collected and a lucky draw conducted to pick out two tickets.

In some other cases, like in Suryapet, the draw was conducted right at the bus station in a service on the Miryalaguda-Kodad route.

In the case of non-deluxe services, which do not have a printed seat number on the ticket, officials said the passenger details were noted on the back of the ticket.

Speaking to The Hindu, Nalgonda Divisional Manager P. Shyamala said nearly 90% of the fleet was operational by mid-November, and the other vehicles which were undergoing service-overhaul have also joined the routes with gradual rise in demand for inter-State services.

Nalgonda region with depots at Yadagirigutta, Devarakonda, Miryalaguda, Nalgonda, Narketpally, Suryapet and Kodad has a fleet of 739 buses, including hired ones, under various categories.

On the first day of the initiative, officials gave away packs of sanitisers, masks and sets of pens as gifts.

Donald Trump in India live updates | Hope the right decision for the people will be made, says Trump on CAA

The Budget session of the Parliament resumes amidst arguments that the Parliament should disperse early in the wake of the ongoing COVID-19 pandemic Both Houses observed silence to commemorate martyrs Bhagat Singh, Sukhdev and Rajguru. Both Houses are expected to be adjourned sine die after passage of the Finance Bill, 2020. Here are today’s updates: […]

Many girls drop out of college after being pressured into marriage

Amid the COVID-19 pandemic, many girl students in Karnataka are dropping out of degree programmes after being persuaded by their families to get marr Source: thehindu.com Related