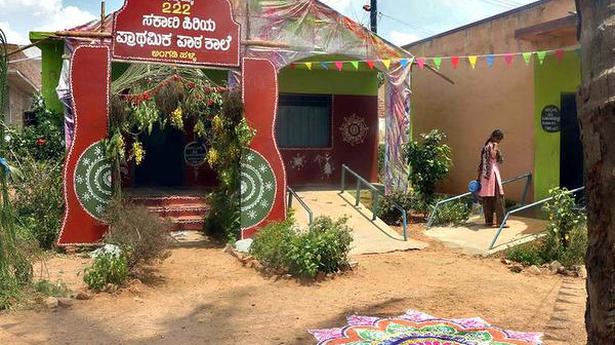 The mood in Angadihalli in Belur taluk is festive. People from the Hakki Pikki tribal community have joined hands with the Election Commission to make polling booths in the village attractive, by showcasing their culture and tradition. For the last three days, men and women have been actively involved beautifying the booths.

The men have painted the compound wall of the government lower primary school, where the two booths are located. Women have drawn rangoli outside the booths to welcome voters. The villagers have prepared special caps using forest produces and they would be offered to senior officers who visit the booths.

Hooraja, a tribal leader and resident of the village, told The Hindu, “I am happy that our tradition is being represented this way. I wish the government machinery also gives due attention to our problems in the coming days.”

Senior officers, including Deputy Commissioner Priyanka Mary Francis and Hassan Zilla Panchayat CEO K.N. Vijay Prakash have visited the place and given instructions on making the booths more attractive. Mr. Prakash told The Hindu that the aim was to attract the tribal community towards the process of election. “This is one of the ways to spread awareness on the importance of voting. We are glad that people of the village actively participated and made the booths attractive,” he said.

These Hakki Pikki people earn their living by selling herbal products. They have been demanding land to cultivate and have staged protests in the past.

Officers of the district administration, along with the National Disaster Response Force (NDRF) and some local volunteers, averted a major disaster by blasting one of the two massive rocks on a mountain in Gokak that could have damaged several houses in the town if it were to slide down. Incessant rain had washed away the […]

The Congress MLA and former Minister Tanveer Sait’s health has improved considerably and he is ready for discharge. “Barring some neurological issues, hoarse voice box and cut earlobe, he is doing perfectly fine and his health condition is good. All his health parameters are normal. He can be discharged whenever his family wants,” said Columbia […]