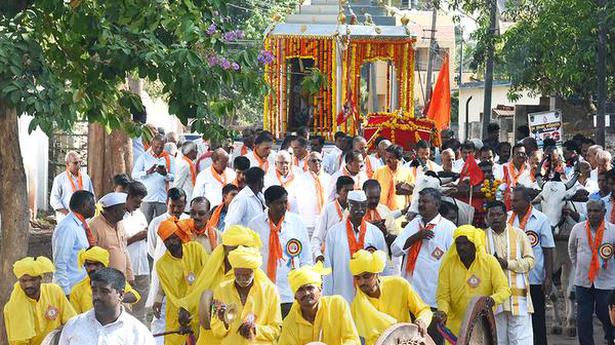 Tributes were paid to 12th century reformer Lord Basaveshwara on the occasion of Basava Jayanti here on Tuesday. At a function organised by the district administration in association with the zilla panchayat and the Department of Kannada and culture, Deputy commissioner M. Deepa paid homage to Basaveshwara. Members of the Basava Kendra sung Vachanas written by Basaveshwara.

In another programme organised by the BJP, party leaders, including Pralhad Joshi, MP, the former Chief Minister Jagadish Shettar and others garlanded the statue of Basaveshwara located at the Kadapa Maidan Grounds. They remembered the services that Basaveshwara rendered to society and his role in reforming it.

Murugha Math seer Mallikarjun Swami flagged off a colourful procession as part of the event on the Ulavi Chennabasava temple premises. A large number of devotees participated in the procession which passed through the major streets of the city. Several religious and educational institutions, voluntary organisations too organised Basava Jaynati programmes.

The Union government has decided to allow corporate India to use their mandatory corporate social responsibility spending on publicly-funded incubators and contribute to research efforts in science, technology, medicine and engineering at major institutions and bodies. Union Finance Minister Nirmala Sitharaman said the rules governing the Corporate Social Responsibility (CSR) spending norms have been amended […]

In a bid to create an alternative regional outfit in the Union territory, former J&K Finance Minister Altaf Bukhari on Sunday announced a new political party, Jammu Kashmir Apni Party, inducting known faces from other groups especially the PDP. The new party’s core agenda would be the restoration of Jammu and Kashmir’s statehood and its […]