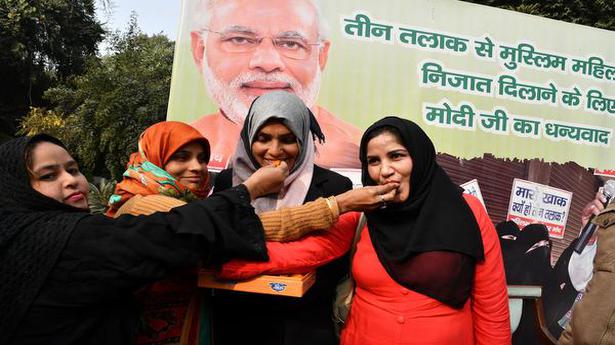 The Triple Talaq Bill has been a major poll plank of the BJP, with the party trying its best to woo a section of minorities with the legislation, even as those who had led the crusade against the practice continue to fight for their survival.

In its recently released manifesto for Lok Sabha polls, the saffron party, which failed to legislate the bill in Parliament due to stiff resistance by the opposition, has pledged to eliminate the practices of instant talaq and nikah halala if re-elected to power.

Vijaya Rahatkar, the national president of the party’s Mahila Morcha, said the efforts of the Narendra Modi government to pass the Triple Talaq Bill “will surely yield positive results for the BJP” in the ongoing Lok Sabha polls.

Ironically, anti-triple talaq champions – Ishrat Jahan, Shayara Bano and Atiya Sabri – who had moved the Supreme Court to seek an end to the practice of instant divorce continue to live in abject poverty, with little or no means of income.

The court, in a landmark judgment in 2017, held the practice “void” and “unconstitutional”.

“I am struggling to make both ends meet. I don’t have money to send my children to school. As of now, I depend on my relatives for financial assistance,” she told PTI.

Ms. Jahan had joined the BJP in 2018 and was initially expected to be one of the major minority faces of the party in Bengal. It was also speculated that she would figure in BJP’s list of Lok Sabha candidates in the state.

“Things appear to have changed. I am not in touch with the party any more. At times I visit party meetings, but that’s about it,” she said, when asked if the BJP leaders inquire about her.

The story is no different for Shayara Bano and Atiya Sabri, who live under stressful financial conditions with no help from their divorced husbands.

“She doesn’t have any income of her own … We try to help her in whatever way we can,” Ms. Bano’s brother Arshad told PTI from Uttar Pradesh.

Ms. Sabri’s brother Rizwan, who is a resident of Uttarakhand, said the family wants the court matter to be disposed off soon. He appealed to both the state and central governments to look into the early disposal of the case.

“My sister stays with me. She is part of my family. We don’t want any financial help, we just want this matter to end soon,” Mr. Rizwan said.

Two other petitioners, Afreen Rahman and Gulshan Parween, could not be contacted.

Rahatkar, when apprised of the condition of the three women, said she had met Jahan and assured her of financial assistance.

“We should always stand by those women who have suffered but not given up. I spoke to Ishrat and told her that we will provide assistance if she needed to send her children to school. We are also willing to give her loan under the government’s Mudra scheme to help her start a business,” Rahatkar told PTI.

Arguing that the triple Talaq Bill does not empower women, Sushmita, the president of All India Mahila Congress, said “criminalizing the practice isn’t the solution“.

“How does it (bill) help a Muslim woman? Punishing the husband does not guarantee financial support for the woman. If you talk about empowering a woman, you have to find her suitable means of income,” Dev said.

Uzma Alam, the convenor of Bengal unit of the women’s cell of All India Muslim Personal Law Board, said “no one but Jahan was responsible for her precarious condition“.

“When she had issues with her husband and was given the talaq, I told her that we would help her in finding a job and make arrangements for her remarriage. But she had other things in her mind so she can’t blame anybody for her condition now,” she added.

With only a couple of days left for the filing of nominations and Friday considered auspicious, the candidates of almost all political parties have filed their nominations in various constituencies in the district. YSR Congress Party general secretary and sitting Punganur MLA Peddireddi Ramachandra Reddy filed his nomination with much fanfare at Punganur. In Chittoor, […]

Ayodhya: belief, travelogues and Skand Purana do not give Hindus title of land, say Muslim parties

Sheer belief that Lord Ram was born exactly under the central dome of Babri Masjid, demolished in 1992 by kar sevaks, does not give the Hindus the title or ownership of the disputed land, senior advocate Rajeev Dhavan submitted before the Ayodhya Bench of the Supreme Court on Monday. “Neither belief nor travelogues nor Skand […]