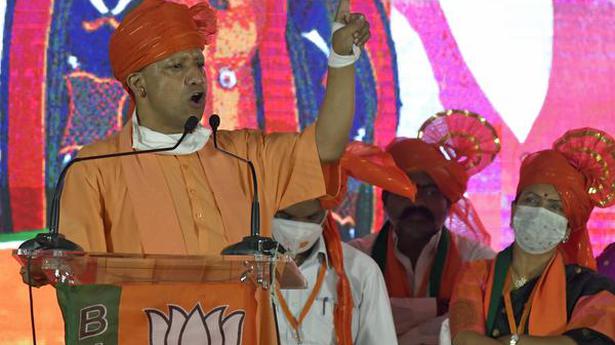 Addressing a public meeting ahead of the civic polls at Shalibanda in the old city on Saturday, Mr. Adityanath asked why KCR could not even care to visit the facility where COVID-19 vaccine trials were going on in the city. “It was Prime Minister Narendra Modi who had taken up a three-city whirlwind tour to assess and mark the progress on COVID-19 vaccine readiness today,” he said.

Drawing a comparison between UP and Telangana, Mr. Adityanath said while 12 crore farmers were benefited under PM-Kisan scheme and money was directly transferred to their bank accounts, “ in Telangana KCR was distributing money to flood victims clearly with an eye on GHMC elections and there was no transparency in it”.

Taking the battle to the turf of Asaduddin Owasis’s AIMIM in Hyderabad, he took potshots on the ‘unholy’ nexus between ruling TRS and AIMIM and said ,“Wherever one sees in Hyderabad, only the pictures of father and son (KCR and KTR) have sprung up. They are looting the State and it is high time that they are shown the door.” Batting for BJP, the UP Chief Minister said BJP alone can change the fortunes of Hyderabad city as its development model is inclusive, progressive and prosperity oriented.

Further, on the issue of changing name of Hyderabad city to Bhagyanagar (city of fortune) as voiced by BJP leaders, Mr. Adityanath said there was no reason why the name should not be changed when the historic Faizabad and Allahabad can be renamed as Ayodhya and Prayagraj respectively.

In a dig at KCR’s rule, he said it has become a ‘Family-Friend’ rule and was only interested in their own development and enrichment. “He is not worried about the poor, farmers or youth. He (KCR) wants his family and friend (AIMIM) to be happy and developed,” Mr. Adityanath said.

Sounding a clarion call, the UP Chief Minister thundered that GHMC elections would set the tone for a resounding BJP victory and decimate the parochial and family-ruled bastions. He appealed to the people to trounce the regional party and give a thumping majority to BJP. Earlier, Mr. Adityanath participated in a road show at Jeedimetla along with BJP State president Bandi Sanjay Kumar.

Bareilly police say they are at it Source: thehindu.com Related

In the face of reports and charges of cross-voting and vote-trading in a number of Lok Sabha segments, the CPI(M) State secretariat is meeting here on Friday for a threadbare analysis of the functioning of the Left Democratic Front’s (LDF) election machinery and also to review its prospects. The seeming nonchalance of the voters to […]