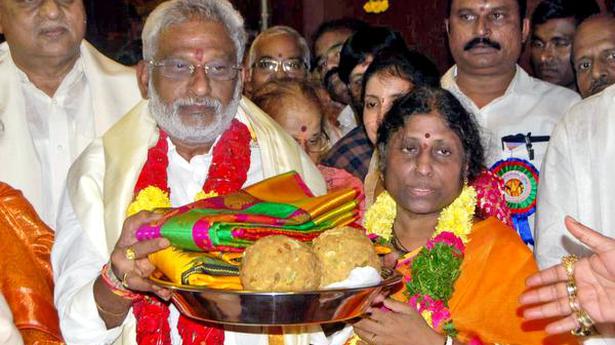 Tirumala Tirupati Devasthanams (TTD) Chairman Y.V. Subba Reddy on Sunday visited the Kanaka Durga temple atop Indrakeeladri hill and offered pattu vastrams to the presiding deity on behalf of the TTD on the eighth day of the Dasara festivities.

Later, addressing the media, Mr. Reddy said that he prayed to the goddess to shower her blessings on the State government for successful implementation of the ‘Navaratnalu’ and other government schemes. Temple Executive Officer M.V. Suresh Babu presented Mr. Reddy with a portrait of the goddess.

Thousands of pilgrims visited the temple to witness the presiding deity adorned as ‘Sri Durga Devi’. Four hundred vedic pundits from across the State visited the temple and chanted religious hymns in the name of the goddess, and each of them was given ₹4,000.

Endowments Minister Velampalli Srinivasa Rao visited the temple and inspected the services extended to devotees during their pilgrimage. He said that officials had assured him that there was no inconvenience caused to the pilgrims.

“By 6 p.m., close to 2 lakh pilgrims visited the temple and almost 1 lakh laddu prasadams were distributed to the pilgrims,” said Mr. Suresh Babu.

Bharatiya Janata Party took out a ‘Sankalp Yatra’ here on Wednesday. Party’s state general secretary Vanathi Srinivasan led the rally that saw the participation of over 500 students highlighting the programmes of the Central government that were in consonance with Mahatma Gandhi’s ideals. Ms. Srinivasan said the rally was in response to a call given […]

At a time when there is a debate on the antiquity of Tamil, poet Vairamuthu has come out with a work that seeks to establish the ancientness and the literary glory of the language. Instead of confining his work to be a treatise on the language, Mr. Vairamuthu has expanded it as a compendium, covering […]

A five-member team of surgeons and gynaecologists at the SVRR Government Hospital in Tirupati succeeded in saving the life of a housewife (25) who developed complications following a alleged messy female foeticide by a woman quack. The woman underwent abortion on November 30 near Chittoor. Following acute pain in the abdomen, family members approached an […]