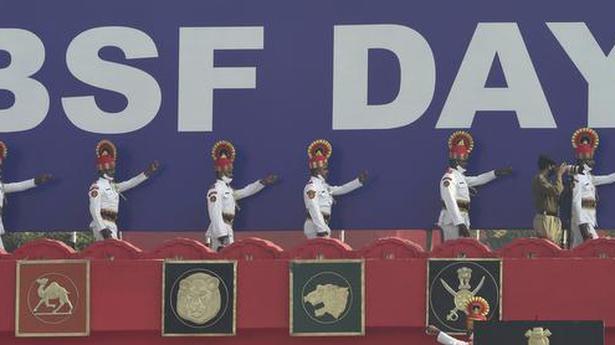 The Raising Day parade of the Border Security Force (BSF) was delayed for around two hours on Tuesday after Home Minister Amit Shah, who was the chief guest at the event, cancelled his visit at the last moment.

Union Minister of State for Home Nityanand Rai filled in for Mr. Shah as the latter opted out due to an “important work”, an official said.

At the event, Mr. Rai said the tunnels and drones found recently along the India-Pakistan border to aid infiltration and smuggling of drugs was proof of the neighbouring country’s hostility towards India.

The BSF was raised in 1965 after the India-Pakistan war. The 2.65-lakh force is deployed along the Pakistan and Bangladesh borders.

BSF Director-General Rakesh Asthana said the force was trying to find technical solutions to counter drones being used to smuggle weapons from Pakistan. On June 20, the BSF intercepted a drone with a huge payload of weapons and ammunition along the Kathua border in Jammu, he said.

A day before the rape victim was set ablaze in Unnao by two of her alleged rapists and three others, a 30-year-old woman faced acid attack by four men in a village for refusing to withdraw her complaint of rape against them, the police said on Saturday. The woman suffered 30% burns and is undergoing […]

He was arrested after complaints of unnecessary challans by people in Berhampur Source: thehindu.com Related