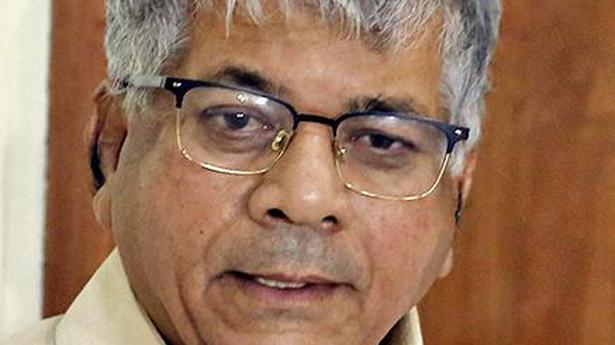 When a tweet from the handle of Vanchit Bahujan Aghadi (VBA) leader Prakash Ambedkar warning the Congress that any possible discussion in future will be from equal level went viral, Mr. Ambedkar denied tweeting any such message.

“If Congress wants to hold discussion with the VBA in future, then it has to be on equal level. The system of political slavery under the Congress has been dismantled,” the tweet said.

Speaking to The Hindu, Mr. Ambedkar denied tweeting any such message. “I don’t want to speak on how and who put this message. But I did not and we as VBA have not decided anything about holding talks with the Congress,” he said.

Mr. Ambedkar said that even though he has not tweeted the above message, he is in agreement with the sentiment of the message. “We are going to hold a meeting of VBA next week, where we will be discussing our future course of action and how to deal with the Congress. Only then we can tell you about any possible talks with them,” he said.

The VBA leader also said that the party will be contesting the Assembly seats in alliance with the All India Majlis-e-Ittehadul Muslimeen (AIMIM). “The Lok Sabha results have shown an alternative to the Muslims of Maharashtra — us. And they have realised that this alternative can win the election, unlike last time,” he said.

The VBA damaged the prospects of the Congress-NCP (Nationalist Congress Party) alliance in around nine seats in the State.

Mr. Ambedkar himself had contested from Akola and Solapur but lost from both constituencies.

Two army personnel were killed in a gunfight with heavily-armed Pakistani infiltrators along the Line of Control (LoC) in Jammu and Kashmir’s Rajouri district on Wednesday, officials said. The infiltrators were intercepted in the Khari Thrayat forest when they were trying to sneak into India from Pakistan-occupied Kashmir (PoK), they said. “Two army soldiers martyred […]

Air India on August 29 announced that the usage of single-use plastic on the flights of its subsidiaries — Air India Express and Alliance Air — will stop from October 2, on the day of Gandhi Jayanti. In the second phase, the single-use plastic will be banned in all Air India flights, it said. In […]