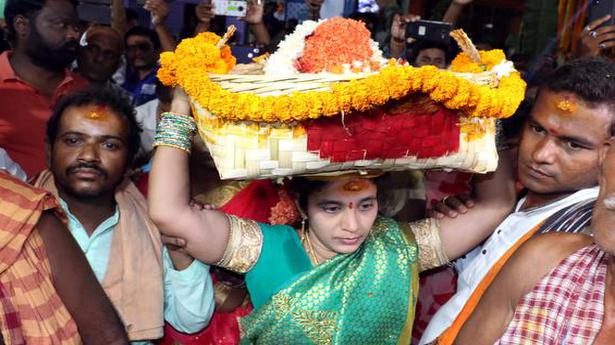 The election carnival in Odisha’s Berhampur has coincided with two big festivals — the 32-day-long biennial Thakurani Jatra and 21-day-long Danda Nata festival — adding to the excitement of the residents.

The Thakurani Jatra festival, famous for its colourful carnival spirit, started in the early hours of Saturday. The 21-day-long Danda Nata festivities will continue till April 14 and voters of Berhampur will exercise their franchise for Lok Sabha and Assembly polls on April 11.

Decked up in colourful flags of Danda Nata, Thakurani Jatra and those of various political parties, Berhampur looks ready for triple celebrations.

During the next two weeks, three types of processions will be an everyday affair in the city. The Thakurani Jatra Ghatam will be taken out to different streets of the old town area during evenings. The march of Danda Nata troupes holding hundreds of flags has already begun.

Night-long folk dance and opera shows are part of Danda Nata being held in different areas of the city. Political roadshows and street-corner meetings have added to the excitement.

“The noise caused by blaring sound systems used for Danda Nata, mixed with that of election campaign loudspeakers, will surely give us a headache,” said Sunita Behera, a housewife.

Prateek Hajela, the officer tasked with supervising the gigantic NRC updation exercise in Assam, must be a relaxed man after the final National Register of Citizens was published on Saturday. The 1995 batch IAS officer of Assam-Meghalaya cadre, appointed the NRC coordinator by the Supreme Court, was in the thick of things while navigating the […]

The apex fisheries cooperative Matsyafed is keeping all its outlets open as part of a Statewide effort to ensure availability of food items during the lockdown to prevent the spread of COVID-19. A senior official said here on Wednesday that the cooperative operated 41 outlets and five mobile shops and had a sales turnover of […]