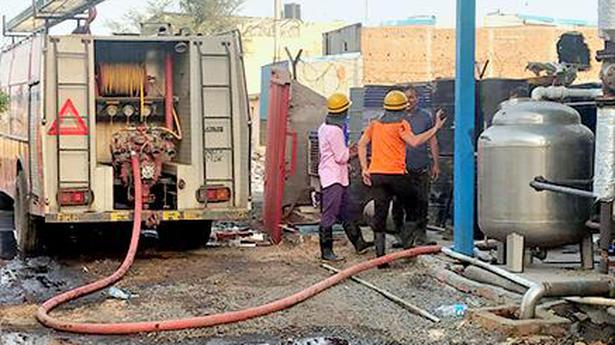 Three persons, including two Chinese nationals, died when a boiler exploded at an animal feed manufacturing unit in Nuh, about 40 km from Gurugram, on Sunday.

The deceased have been identified as senior engineer Jhin Jhin Yang, production engineer Jhang Yang and Vicky Rajput, an operator. Vicky was a resident of Sohna in Gurugram.

Nuh SP Sangeeta Kalia said the incident took place around 3:30 p.m. when the boiler in Pusilin Biotechnology exploded during repair. “Vicky was carrying out some welding work to repair the boiler and the two Chinese nationals were standing close to him when the boiler exploded, causing a fire. All three were engulfed in flames and died on the spot,” she said.

The company, which manufactures and trades in animal and poultry feed, was set up in 2017.

Ms. Kalia said preliminary investigation suggested the incident was caused due to lack of proper maintenance of the boiler and the police were trying to contact the management.

“A case will be registered against the management in this connection. We are trying to procure documents from them about the periodic maintenance of the boiler,” she said.

The bodies were pulled out after the fire was doused and sent to Shahid Hasan Khan Medical College for post-mortem.

A woman here has alleged that a BSP leader whom she accused of rape has sent out threats from prison that she would “meet the same fate” as the Unnao rape victim. The former student of a Varanasi college had in May lodged an FIR against Atul Rai, who is in jail and yet to […]

Hailing the Swachh Bharat Mission, Defence Minister Rajnath Singh on Saturday said that sanitation had become a people’s movement in the country. At an event in Delhi, he said that children had become the ambassadors of ‘Swachhta’ (cleanliness). Source: thehindu.com Related

Chief Secretary K. Shanmugam on Thursday denied that he had humiliated a delegation of DMK MPs led by T.R. Baalu when they met him in his office on We Source: thehindu.com Related