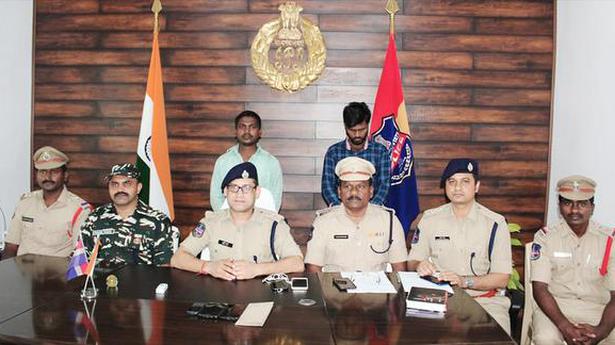 The district police claimed to have apprehended two CPI (Maoist) couriers, including a junior advocate, during a vehicle checking drive at Anand Colony on the Charla-Pusuguppa road in Charla mandal on Saturday evening.

The police identified those nabbed as 29-year-old Anil Kumar, a junior advocate of Hanamkonda in Warangal Urban District, and 28-year-old D. Suresh of Jayashankar Bhupalpally district.

Disclosing this to mediapersons in Kothagudem on Sunday, Superintendent of Police Sunil Dutt said the duo were apprehended while they were moving in a suspicious manner on a bike near Anand Colony on Saturday evening. They were told by CPI (Maoist) State committee secretary Jagan to handover three mobile phone memory cards and four letters to three persons — Prabhakar, Ravindranath and Krishna, he said.

Anil is a practising junior advocate of Hanamkonda and also a member of Committee for Release of Political Prisoners (CRPP) and the district secretary of the Telangana Vidhya Vedika (TVV), the SP said, adding that Anil was acting as a ‘courier’ of the CPI (Maoist) State committee leader Haribhushan.

He has been arranging meetings of leaders of the Maoist frontal organisations with Maoist leaders to propagate Maoist ideology, receive financial support and extort money from businessmen and contractors for the outlawed outfit, the SP added.

A fake currency printing unit was unearthed by the police in Parlakhemundi of Odisha’s Gajapati district on Monday. Police suspect the unit was being used to print counterfeit notes to be distributed during the elections in the State. Fake currencies with the face value of ₹2,50,000 in ₹500 denomination was seized from a rented house, […]

Helicopter services for devotees visiting the Sri Raja Rajeshwara Swamy temple in Vemulawada for Mahasivaratri has proved to be a big hit with the local residents. It was launched between Hyderabad and Vemulawada by the Telangana State Tourism Development Corporation in collaboration with the Telangana State Aviation Corporation on February 20. Three packages were on […]

Kalasa Banduri project will get priority in the budget: CM

Adequate provisions will be made in the forthcoming State budget for the implementation of the Kalasa Banduri project on a priority basis. This was stated by Chief Minister B.S. Yediyurappa during his visit to the city on Friday. He said the project was beset with problems for years, but they have been resolved and it […]