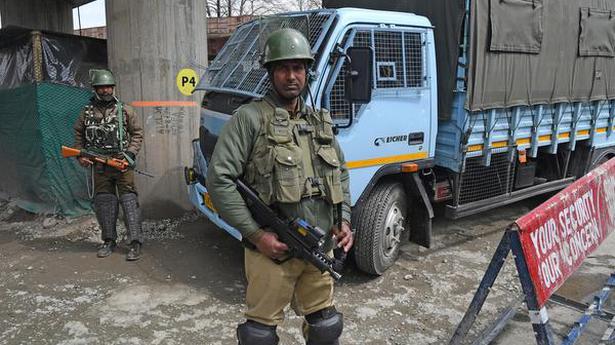 Two policemen, including an officer, were injured in a grenade attack by militants in Sopore township of Baramulla district of Jammu and Kashmir on Thursday, police said.

Militants lobbed a grenade at a security forces party at Main Chowk Sopore in the north Kashmir district, a police official said.

He said two policemen, including the Station House Officer of Dangiwacha police station, sustained minor injuries in the explosion. The injured have been hospitalised.

Security forces have cordoned off the area and a search has been launched to nab the attackers, the official said.

The parents of a four-month-old child from Manjeri who died of COVID-19 at the Government Medical College Hospital, Kozhikode, on April 24, have alleg Source: thehindu.com Related

Power Dressing: How netas walk the talk with their wadrobe

Clothes have long been visual shorthand for netas to communicate their politics. So, if Prime Minister Narendra Modi’s half-sleeved kurtas and well-groomed appearance give the impression of a man who knows his mind and likes order in everything he does, his primary political opponent, Congress president Rahul Gandhi, portrays a youthful image in his kurta-pyjama […]