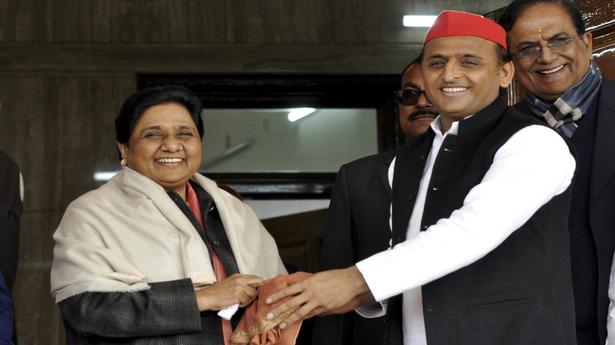 “The First Law of Democracy: what goes up, must come down. Those who forget this do so at their peril,” Samajwadi Party president Akhilesh Yadav tweeted on Sunday as the Election Commission announced dates for the 2019 Lok Sabha election.

Though Mr. Yadav did not name any party or leader, his warning is understood to have been directed at Prime Minister Narendra Modi and the BJP, which along with its allies won 73 of the 80 seats in Uttar Pradesh in 2014. While the BSP and RLD failed to open their scores, the SP could only win five seats, all held by members of the Yadav clan; the Congress was restricted to Amethi and Rae Bareli.

Mr. Yadav, whose party has formed an alliance with Ms. Mayawati’s BSP and the RLD, appealed people to vote for “hope and unity.”

Unlike in 2014, when the BJP rode a Modi wave to overpower a divided opposition in what was essentially a four-way fight, the equations have changed this time.

In 2014, the BJP allied with the Kurmi-based Apna Dal, giving it two seats including one adjoining Varanasi, where Mr. Modi contested and was unsuccessfully challenged by AAP chief Arvind Kejriwal. The BJP’s social arithmetic got stronger in 2017 Assembly polls as it also joined hands with the Suheldev Bharatiya Samaj Party of Om Prakash Rajbhar, who holds sway among the Rajbhar (most backward caste) in parts of Purvanchal.

However, ever since storming to power in the State with 325 seats, the BJP-led government has been facing internal problems in the form of its two disgruntled OBC allies. The three parties are yet to announce a formal seat-sharing arrangement.

On the other hand, the BSP will contest 38 seats, the SP 37 and the RLD 3 in the anti-BJP alliance. The allies have decided to not field any candidates in Rae Bareli and Amethi, Congress pocket boroughs.

Reacting to the poll announcement, Ms. Mayawati said the 130 crore people of India “deserve a better government.” She accused the Modi government of being anti-poor and pro-capitalist, and “causing unrest and anger among the masses.”

Ms. Mayawati also appealed to the EC to ensure that the election process was “clean and credible,” and the ruling BJP is not allowed to misuse power unlike “in previous elections.”

Learn to live with COVID-19, focus on development without lockdown: CM

Dalits of Hadya village in Mandya taluk, who have been living in thatched houses on government lands from nearly eight decades, commenced an indefinite protest near the office of the Deputy Commissioner on Tuesday seeking title deeds and other facilities. According to them, the district administration and the departments concerned have been refusing to provide […]

The Department of Nephrology at Christian Medical College, Vellore celebrated World Kidney Day on Thursday with the theme ‘Kidney Health for Everyone Everywhere’. The public awareness and screening programme was organised on the hospital campus which saw the participation of over 500 persons. Head of the Department of Nephrology, Santosh Varughese motivated everyone to pledge […]