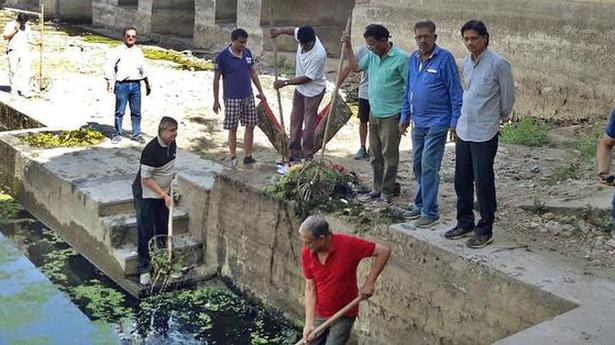 A contentious decision of the Udaipur Urban Improvement Trust to redefine and protect the boundaries of the famous Pichola and Fateh Sagar lakes at their “full tank level” has led to 30% shrinkage in their size and reduced their submergence area to 4.5 sq. km and 2.5 sq. km, respectively. The subsequent construction activities on the lakefront land have changed their ecological character of the once beautiful lakes.

The increasing threat to the lake ecosystem in the City of Lakes, which is a globally renowned tourist destination, is conspicuous by its absence as an issue in the election campaign.

The tribal-dominated Lok Sabha constituency in southern Rajasthan has witnessed steady inroads made by the BJP during the last two decades. In the poll battle for the 17th Lok Sabha in the constituency reserved for the Scheduled Tribes, the BJP has been trying to influence the voters through its high-pitched campaign highlighting the Balakot air strikes in retaliation for the Pulwama terror attack.

Of the eight Assembly segments in the LS constituency, the BJP had won seven and the Congress one in the 2018 election, which was a repeat of the 2013 Assembly election results. Sitting BJP MP Arjun Lal Meena, who is contesting again this time, has sought votes for another term with an entreaty that it would “to help him complete his unfinished projects”. However, rejuvenation of shrinking lakes has failed to find a mention in his campaign.

Mr. Meena said though the Congress had formed the government in the State, it would face defeat in the Mewar region. On the other hand, Congress candidate Raghuveer Meena, a three-time MLA and an ex-MP, said the Centre’s Smart City project had failed in Udaipur, with most of the roads dug up, and only a fraction of the sanctioned funds had been spent on improving the city’s infrastructure.

Activists in the region blame poor implementation of the National Lake Conservation Plan for the pathetic condition of lakes. Jheel Sanrakshan Samiti’s joint secretary Anil Mehta said told The Hindu that the entire lake system , comprising Pichola, Fateh Sagar, Swaroop Sagar, Badi and Udai Sagar, should be restored to the “maximum water level” with the erection of pillars and the lakefront be left undisturbed for nesting and breeding activities of local and migratory birds.

The Jheel Sanrakshan Samiti has also called upon the authorities to stop plying of motorised boats for tourists in the lakes. Dr. Mehta said the diesel and petrol-run boats were polluting the lake waters and increasing the growth of algae as well as sediments at the bottom. Among all lakes, Fateh Sagar is a major source of drinking water for residents of Udaipur.

The lakes are also facing contamination caused by the discharge of pollutants from the phosphorite mines and chemical factories and the release of sewage and domestic waste from settlements and hotels. Dr. Mehta said the destruction of lakes had not been raised as a political issue during elections because of the nexus between the powerful lobby of hoteliers and land mafia.

Firoze Suhail, a resident of Panchwati locality near the Saheliyon Ki Bari tourist spot, said that not a single project of Smart City had been completed in the last four years., while all main roads, bylanes and arterial roads had been dug up for laying of cables and sewer lines. The citizens would not just consider the national issues, but also the poor infrastructure and damage to lakes while exercising their franchise, he said.

‘Asha’ was rescued by West Bengal police when they found her being mistreated outside their training facility. Officers originally intended keeping the mixed-breed stray as a pet, but Asha turned out to have a nose every bit as good as the German Shepherds and Labradors usually trained to sniff out explosives and drugs. Source: thehindu.com […]

Evacuees returning to their homes in Kodagu, Mysuru

Evacuees have started returning to their respective villages in Kodagu and Mysuru districts, though in small numbers, to check out the condition of their flooded homes and properties after over a week of staying in relief centres. As many as 8,000 people have taken shelter in about 45 relief centres across Kodagu since the deluge. […]

Restaurants, bars can sell liquor till May 17