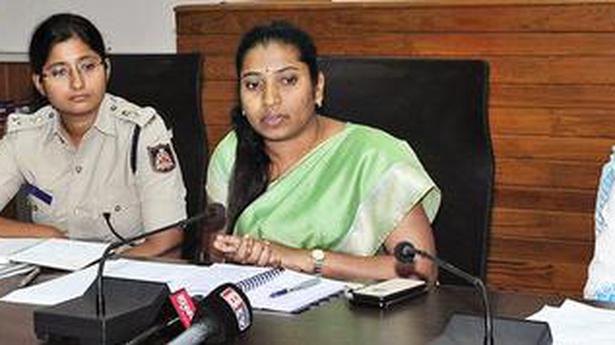 There would be 1,837 polling booths in the entire constituency this time. Basic facilities will be provided at all these booths in Udupi district. The Chikkamagaluru Deputy Commissioner would supervise the booths in that district.

The electoral rolls and list of booths had been provided to all recognised political parties. The Model Code of Conduct announced by the Election Commission would be strictly enforced. Deputy Conservator, Social Forestry, Bhaskar B., had been appointed as nodal officer for enforcement of Model Code of Conduct in the district.

After the announcement of polls, teams had started removing publicity material. People should remove any banners or flags of political parties in front of their homes, she said.

No one could carry cash more than ₹ 50,000 without proper documents. Permission should be compulsorily sought for holding election meetings and using loudspeakers. Loudspeakers could be used only from 6 a.m. to 10 p.m. Every candidate could spend up to ₹ 70 lakh as election expenses. The Expenditure Monitoring Cell and Assistant Expenditure Observer would monitor the expenditure.

People could register complaint regarding poll code violations on the mobile app, C-VIGIL, developed by the Election Commission. There was provision to enrol names in electoral rolls till March 26. All messages on social media with regard to polls would be monitored, Ms. Korlapati said.

Connectivity, a bridge too far for water-locked Odisha villages

Mainstream political parties may find 1,000 votes in 16 villages surrounded by the waters of the Indravati reservoir in Odisha’s Kalahandi district too small a voting bloc, which is probably why the demand for a bridge connecting them to the mainland has never been taken up seriously over the last six Lok Sabha and four […]

Ahead of the municipal elections in Rajasthan, the UN-Habitat has released a grant of ₹10 crore to the Jaipur Municipal Corporation for environmental protection through innovative steps in the urban local body. The corporation will also conduct a fresh survey of properties in the capital city for assessment of urban development and house taxes. A […]