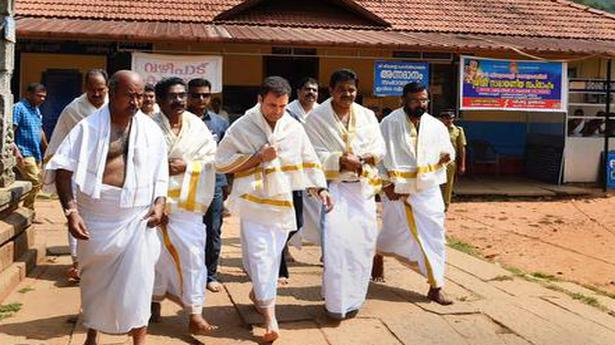 Ahead of the second phase of voting on Thursday, Congress president Rahul Gandhi said Prime Minister Narendra Modi now only talks about “national security” because he “stands exposed as a politician full of lies and false promises”. He emphasised that “the real and biggest national security issue is unemployment”.

In a wide-ranging interview with The Hindu, Mr. Gandhi spoke on key political issues such as the Rafale deal and the minimum income guarantee scheme, or Nyuntam Aay Yojana (NYAY). “We are fighting for India’s youth, its farmers, its small traders and businessmen, its women, its deprived sections and its poor. We are not only in opposition to Mr. Modi, but this is a fight for the very idea of India,” he said.

He also maintained the suspense over fielding his sister and general secretary Priyanka Gandhi-Vadra from the Varanasi Lok Sabha constituency against Mr. Modi.

“I’m not confirming or denying anything. I’m just saying that I’ll leave you in suspense,” he said, asked whether Ms. Vadra would contest against Mr. Modi.

The last day for filing nomination is April 29, and the Congress has so far not declared its nominee for the seat, from which Mr. Modi is seeking re-election.

In his first comments after the Supreme Court sought an explanation for allegedly linking an interim order of the court in the Rafale case to his ‘Chowkidar chor hai’ comment, Mr. Gandhi said, “There’s a legal process on; so I won’t comment on the SC because I respect it.”

Talking about a tie-up with the Aam Aadmi Party (AAP) in Delhi, he said he had “convinced everyone in his party of its importance,” and put the onus of forming an alliance on Chief Minister Arvind Kejriwal.

The Congress president sought to assuage middle class concerns over having to pay higher taxes to fund NYAY. He said: “Not a single rupee would be charged from them.”

On the BJP’s campaign theme of “dumdaar sarkar” (muscular government), he claimed that the ruling party had been forced to change its strategy after the first phase of polling as its focus on security issues had “backfired.” “The Congress has torn Mr. Modi’s perceived strengths to shreds. What you will see is that Mr. Modi’s gubbara (balloon) is going to burst! No wonder, after the first phase, they’re moving from ‘national security’ back to ‘vikas’ (development).”

Indian and Pakistani experts travelled to the border crossing in Punjab for the proposed Kartarpur Corridor on Tuesday, and discussed the coordinates for the “zero point” where Sikh pilgrims will cross over, officials in Delhi and Islamabad said. The two sides will meet next on April 2, to take forward plans to complete the corridor […]

Minibuses to be allowed on Charmadi Ghat stretch

The Chikkamagaluru Deputy Commissioner has relaxed restrictions on the movement of vehicles on the Charmadi Ghat stretch of Mangaluru-Villupuram (NH 73) by allowing KSRTC minibuses during the day time. The stretch was severely damaged by heavy rains in August this year. Deputy Commissioner Bagadi Gautam, in his order on December 26, allowed KSRTC minibuses citing […]

DIG, SP take stock of security at strongrooms in Anantapur

Deputy Inspector General of Police Kanthi Rana Tata and Superintendent of Police GVG Ashok Kumar on Wednesday reviewed the three-tier security provided to the strongrooms at the JNTU, Anantapur, and Sri Krishnadevaraya University. The officials went to those locations and talked the CRPF and APSP personnel in-charge of the first two core layers of security. […]