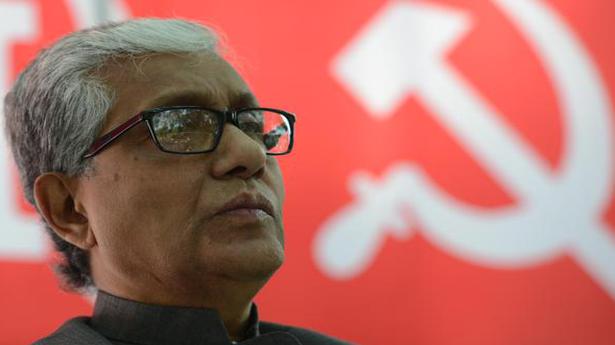 Former Chief Minister and leader of the Opposition in the Tripura State Assembly Manik Sarkar alleged that an unruly mob disrupted his visit to Dhanpur, his assembly constituency on Thursday. He demanded lawful action against the perpetrators who are targeting the opposition rank and file across the State.

Mr. Sarkar said several people raised slogans and attempted to block his movement at Dhanpur. “Not that that all of them (protestors) exhibited muscle, but some were unruly,” Mr. Sarkar said.

However, he said adequate security arrangements were in place in the area to facilitate his visit. “But I advised them [police] not to apply force against those who disrupted my movement,” the former CM stated.

Dhanpur is located in Sepahijala district, about 48 km south of Agartala.

CPI(M) sources said Manik Sarkar was to visit a party office in Dhanpur which was recently attacked and take stock of the situation.

The ruling BJP denied that its cadres were linked with the incident. Party spokesperson Nabendu Bhattacharjee said the locals could have expressed their anger against their MLA (Manik Sarkar) for some reasons.

The High Court of Karnataka on Tuesday ordered issue of notice to the State government on a PIL petition seeking actions against MLAs and MLCs who had allegedly influenced the Chief Minister as well as the State police chief for posting of police officers of their choice to police stations falling under their constituencies. A […]

V.K. Sasikala, a close aide of former Chief Minister Jayalalithaa, advanced a loan of ₹237 crore in illegal tender to a government contractor. The Hindu has accessed documents proving this, along with other documents showing she had purchased properties worth ₹1,674.50 crore using demonetised currency notes. According to I-T sleuths, a search conducted on the […]