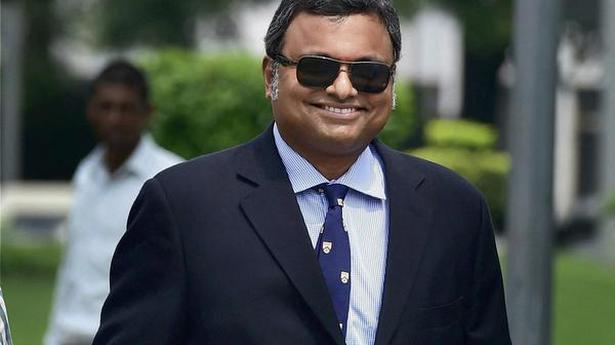 The Congress on Sunday evening released its ninth list of Lok Sabha candidates fielding among others Karti Chidambaram in Sivaganga constituency in Tamil Nadu, triggering strong protests from former Union Minister E.M. Sudarshana Nachiappan, who was in the race for the seat.

Mr. Nachiappan had in 1999 defeated Mr. Karti’s father P. Chidambaram, when the latter was in the Tamil Maanila Congress.

The intense fight between Mr. Karti and Mr. Nachiappan delayed naming the candidate for Sivaganga. On Sunday the list was released and it included Rajya Sabha member B.K. Hariprasad (Bangalore South) and Tariq Anwar (Katihar in Bihar), who had recently quit the NCP. With this the party has fielded 227 candidates so far for the seven-phase polling.

Mr. Karti had lost the elections in Sivaganga in 2014. He is facing criminal cases, including a money laundering case involving INX Media.

Asked whether there would be some political fallout of the INX Media case, Mr. Karti said there was no case against him and he faced no case in any court. “There are only unfounded allegations against me and no court has framed charges against me. I am not facing any trial in any court,” he told The Hindu.

However, Mr. Nachiappan hit out at Mr. Chidambaram and Mr. Karti accusing the former of preventing his political growth many times.

“My name was in the list and was about to be announced along with others. That was why I was asked to be present in Delhi and later told to reach Chennai to file my nomination papers. But Mr. Chidambaram intervened and ensured that his son was given the seat,” Mr. Nachiappan told The Hindu.

“Till Monday the investigating agency cannot arrest him. If the judge says the agency is free to take its own step what will happen to him? Has the Congress not been able to find a good candidate in the entire country? Is Mr. Karti a freedom fighter? If the court decides against him it will also reflect on the party and Prime Minister Modi is ready to utilise the opportunity,” Mr. Nachiappan said.

The Congress list contains four candidates from Maharashtra, three from Bihar and one each in Tamil Nadu, Karnataka and Jammu and Kashmir.

Replacing its candidate from Chandrapur in Maharashtra, the Congress fielded Suresh Dhanorkar in place of Vinayak Bangade.

The change of candidate in Chandrapur is significant as Maharashtra Pradesh Congress Committee (MPCC) chief Ashok Chavan was reported to be unhappy over the earlier candidate.

The party has also fielded Hidayat Patel from Akola, Kishor Uttamrao Gajbhiye from Ramtek-SC and Subhash Wankhede from Hingoli in Maharashtra.

Other names that have been cleared include Mohammed Javed from Kishanganj and Uday Singh alias Pappu Singh from Purnia in Bihar and Haji Farooq Mir from Baramulla in Jammu and Kashmir.

(With inputs from Sandeep Phukan in New Delhi)

Well begun is half done. The maxim seems to have guided the Narendra Modi government as it made an explosive start to its second term in office on May 30. Its 100-day strategy has been marked by speedy decision-makingdecisions pending for years have been taken. The dilution of Article 370 to alter the status of […]

Sringeri Math head Sri Sri Vidhushekhara Bharathi has called upon the youth to lead a life of virtue by upholding the values enshrined in Sanatana Dharma. He also exhorted them never to forsake or ignore the great legacy of India. He was speaking at a reception given to him by the Kerala Brahmana Sabha (KBS) […]

To urge the voters of Mandya and Bengaluru Rural Lok Sabha constituencies to vote, Systematic Voters’ Education and Electoral Participation (SVEEP) programmes were organised at Mandya and Ramanagaram towns on Wednesday. Zilla Panchayat Chief Executive Officers K. Yalakki Gowda in Mandya and M.P. Mullai Muhilan in Ramanagaram, inaugurated the programmes at the district stadiums at […]