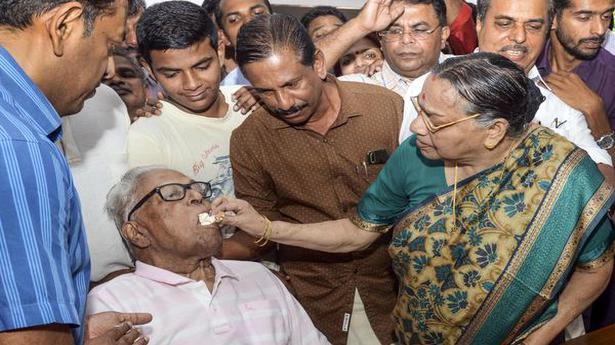 In the presence of close family members and well-wishers, Achuthanandan cut a cake and his wife gave him a small piece to mark the occasion. As leaders from various political parties, friends, well-wishers and media personnel turned up to wish him, Achuthanandan thanked everyone.

Kerala Governor Arif Mohammed Khan was among those who extended birthday wishes to the senior leader. “Conveyed my heartiest wishes to V.S. Achuthanandan, former Chief Minister and senior leader on his 96th birthday.

V.S. Achutanandan is one of the most respected political figures of Kerala,” Mr. Khan tweeted.

The Governor would be visiting Achuthanandan tomorrow to wish him personally.

A founder leader of the CPI(M), Velikkakath Sankaran Achuthanandan, popularly known as V.S. Achutanandan, whose life has been linked to the history of Communist movement in the State, including Punnapra-Vayalar uprising, is the oldest living Communist in India.

He was among the 32 leaders who walked out of the historical CPI national council meet in 1964 to form the Communist Party of India (Marxist).

Achutanandan, who is the chairman of the Adminstrative Reforms Committee, had addressed Party workers at an election convention at nearby Vattiyoorkavu, which is among the five Assembly constituencies where bypolls are being held on Monday.

V.S., who had served as the Leader of Opposition and Chief Minister, was the star campaigner of the CPI(M)-led LDF in 2016 assembly elections, which saw the front riding to power in the southern State with a massive mandate of 91 Seats.

After the Assembly results came out, the CPI(M) General Secretary Sitaram Yechury had described V.S. as the “Fidel Castro of Kerala” who would continue to guide and inspire the Party, while naming Pinarayi Vijayan as the Chief Minister.

Without worrying about the scorching heat, Gurulingappa Layadagundi (80) waits with a water-filled steel pot outside his small shed-like home on Railway Station Road of the city, for people to offer drinking water. This has been a routine for this aging man for the last over three decades. People, mainly autorickshaw drivers, normally do not […]

Although work in government offices not engaged in essential services has come to a standstill, their pay and accounts divisions are functioning to ensure that the employees get salaries on time. “The pending salaries of contractual workers are also being cleared by supervisory officers on a priority basis,” said an official in the Income Tax […]

Centre extended the ban on the Liberation Tigers of Tamil Eelam (LTTE) on Tuesday for violent and disruptive activities that are prejudicial to the integrity and sovereignty of India. The Ministry of Home Affairs renewed its 2014 notification to declare LTTE as an “unlawful association” for another five years. In the notification, the MHA said […]