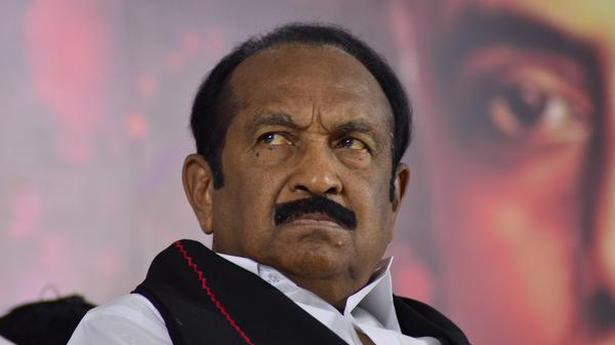 Marumalarchi Dravida Munnetra Kazhagam (MDMK) founder Vaiko has condemned the police lathi charge on persons, who staged a protest following the death of 17 persons after a wall collapsed on three houses they were living in at Nadur in Mettupalayam in Coimbatore district on Monday.

In a statement issued in Chennai on Tuesday, Mr. Vaiko condoled the death of the 17 persons.

“I urge the Tamil Nadu government to take steps to ensure distribution of relief materials to the affected families on humanitarian grounds,” he said.

Referring to a protest staged by some persons in connection with the incident and the reported police lathi charge on them, Mr. Vaiko condemned the police action.

Hassan Lok Sabha member Prajwal Revanna has asked the Hassan district administration to submit a proposal to the State government seeking expansion of forest cover by taking over agriculture land from farmers willing to offer their land, to mitigate human-elephant conflict in Sakleshpur taluk. He gave this instruction in a meeting with officers and elected […]

Officials of the Idol Wing CID took possession of two metal idols of Veenadhara Dakshinamurthy and Tiripuranthagar from the art gallery at the Thanjavur palace complex on Saturday, on the ground that they belonged to the Sri Brihadeeswarar Temple. The action came after Madras High Court-appointed Special Officer Ponn Manickavel and Idol Wing officials conducted […]

The headman and four others of Marou village in Manipur’s Ukhrul district have lodged a police complaint against an Assam Rifles officer for torturing a 28-year-old marginal farmer after he failed to produce identification proof during an allegedly impromptu checking of the bus he had boarded. The incident happened on May 6 at Litan, near […]